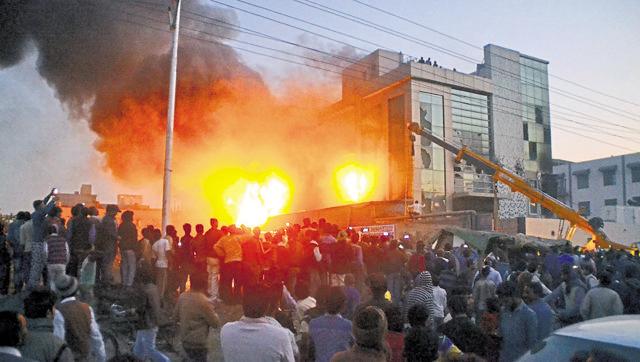 Ghaziabad, 11 Nov 2016 : At least 13 persons were killed and more than a dozen injured in a factory fire in Uttar Pradesh’s Sahibabad industrial area here, police said on Friday.

The victims were charred to death inside a leather factory after a fire broke out at 5.00 a.m. due to an apparent short circuit at the manufacturing unit at Shahid Nagar area along the G.T. Road.

The police said the sudden blaze within the closed confines of the facility on a narrow lane of a densely populated area, caught at least 40 workers by surprise who were reportedly inside.

As the workers tried to flee, the narrow passage at the entrance blocked their escape. Though some did succeeded in fleeing the conflagration, about 20 workers could not get out.

Thirteen of them were charred to death while three who reportedly jumped out were rescued and taken to a local hospital in critical condition.

“As we came to know of the incident, about a dozen fire tenders were rushed to the spot,” said Chief Fire Officer Ashfaque Hussain.

“The real constrains were the narrow lanes that lead to the factory. We could not reach our fire tenders at an advantageous position to tackle the blaze.

“However, we managed to bring the fire under control after two long hours,” Hussain said.

“An investigation has been initiated to ascertain the cause of the fire and check whether there were any security lapses by the owner, Rizwan,” said SP City Ghaziabad Salman Taj Patil.

It was a great honour, says Trump on meeting Obama