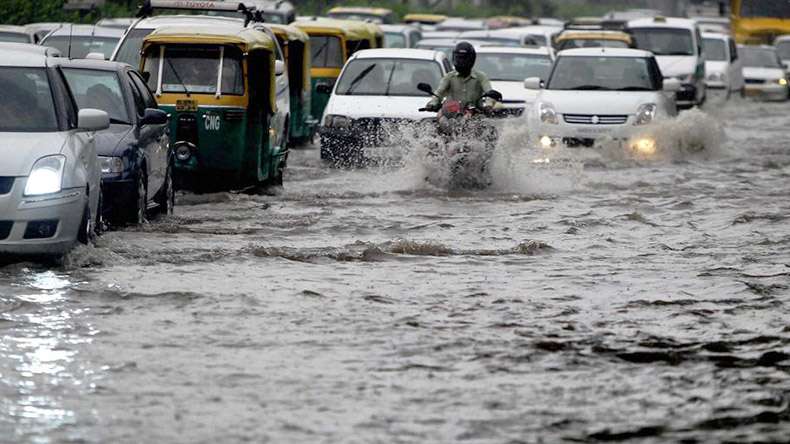 New Delhi, Aug 31 : Heavy rains on Wednesday morning caused waterlogging in many areas and massive traffic gridlocks in the national capital, stranding people on the roads.

Traffic helpline officials told that they were flooded with calls of snarls and waterlogging across the city.

“Reports of heavy traffic congestion and vehicles being stuck on roads are coming from different parts of the city since morning. We have till now received more than 100 calls of traffic jams and waterlogging,” an official of the traffic helpline said.

Though the heavy rains made the weather pleasant with the minimum temperature settling 26 degree Celsius, one notch below the season’s average, it derailed traffic movement across several stretches. Commuters had a tough time reaching their destinations.

Bhanu Srivastava, an engineer, told IANS that most of the roads leading to Noida from Delhi were flooded and there was a pile up of vehicles on the roads.

“I left from my house in Lakshmi Nagar around 9 a.m. for Noida. It took me over one-and-a-half hour to reach office in Noida Sector 11 where I barely reach in 30 minutes on normal days,” Srivastava said.

Many commuters shared their frustration of getting stuck in traffic gridlocks on Twitter.

“As lovely as the pouring rain looks from the office or house window. One can only imagine the plight of people on the road,” Nandia Kodesia tweeted.

“Morning bliss with Delhi rains but will have to deal with traffic jam later,” Arpit Gupta tweeted.

“Rain in the morning really gives relief but again filled with anger and frustration as stuck for hours on waterlogged roads and heavy traffic jam. It is irritating,” Manshi Shukla tweeted.

Terrible traffic snarls were seen on roads heading to Gurgaon — which again came to a standstill — and the airport.

“The sky will be generally cloudy throughout the day,” an official of the India Meteorological Department said.

The maximum temperature is likely to hover around 32 degree Celsius

Man who threw acid on Delhi nurse convicted for murder