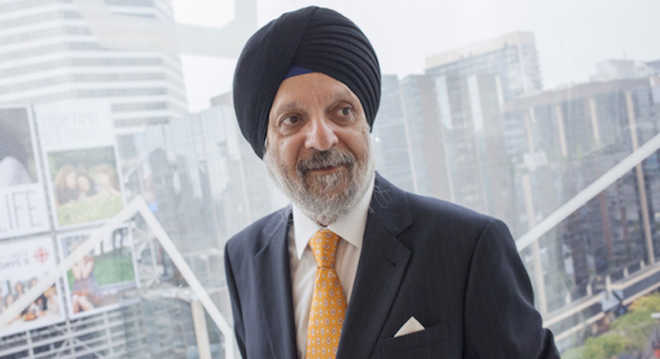 Toronto-based Marwah, who retired from Scotiabank in 2014, was among six people from Ontario who were appointed to the Senate by Prime Minister Justin Trudeau.

Trudeau lauded Marwah for his efforts for showcasing the “rich diversity of Sikh and South Asian art and culture”.

Marwah is one of the founders of the Sikh Foundation of Canada that promotes culture and art among the diaspora community.

Marwah, who was born in Kolkata in 1952, did his his schooling from St Xavier’s School. He is an alumnus of Delhi’s St Stephen’s College and the Delhi School of Economics, and holds an MBA degree from the University of California – Los Angeles, US.

In 2005, he was elevated as the Vice Chairman and chief administrative officer. In 2008, he was re-designated.

Marwah has served on the boards of many famous Canadian institutions such as the Toronto Star daily, the Toronto International Film Festival, the C.D. Howe Institute, the Royal Ontario Museum, the United Way Campaign, and the Hospital for Sick Children.

While Marwah will be the only Indian-origin member of the Senate (upper house), there are over 20 members of Indian origin in the House of Commons (lower house).