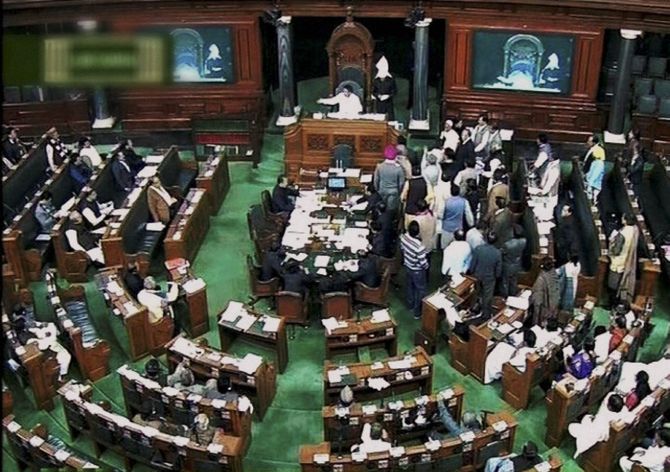 New Delhi, 22 Nov 2016 : The Lok Sabha was adjourned for the day on Tuesday as the opposition noisily protested against the demonetisation, accusing Prime Minister Narendra Modi of behaving like a dictator and pushing ordinary people into hardship.

The House witnessed uproarious scene as a united opposition reiterated its demand to discuss the demonetisation issue under the rule which entails voting.

Congress leader Mallikarjun Kharge reiterated the demand to suspend Question Hour and start the discussion but Speaker Sumitra Mahajan did not permit it.

She urged them not to disturb the Question Hour but the opposition parties continued their protest.

A miffed Mahajan said it was not fair to disrupt the House and urged the slogan-shouting opposition leaders to take their seats and let the Question Hour continue.

As Minister of State for Home Affair Kiren Rijiju rose to reply questions related to terrorism in Jammu and Kashmir, opposition members led by the Congress and Trinamool Congress rushed towards the Speaker’s podium demanding an adjournment motion.

But the opposition did not relent and continued shouting slogans: “Modi sarkar hosh me aao” and “Modi teri tanashahi nahi chalegi, nahi chalegi”.

Mahajan then adjourned the House till 12 and said: “It pains when elected representatives behave like this.”

When the House at 12 noon, opposition members including from the Congress, TMC, Samajwadi party and Nationalist Congress Party trooped towards the Speaker shouting slogans.

Parliamentary Affairs Minister Ananth Kumar said the people of the country were with the November 8 demonetisation decision.

Kharge countered and said the opposition too was ready for a debate. He sought Modi’s presence in the House.

“We want a discussion because the poor, farmers, labourers are dying. Marriages are breaking up. Lives are being spoiled,” Kharge said.

TMC leader Sudip Bandopadhyay urged the chair to rise on the occasion and allow the discussion under the rule which entails voting.

“What is the harm in discussing under voting provisions? Why is the government shying away? If House is not running, the ruling party is also responsible for it,” he said.

Kumar rose to respond and reiterated that the government was always ready to discuss the issue — in Parliament and outside.

“We have won the Shahdol and Lakhimpur Lok Sabha constituency seats. What is the signal? People’s voice is clear. They are against black money and corruption,” he said.

As the opposition parties didn’t relent and continued their protests, the Speaker adjourned the House for the day.