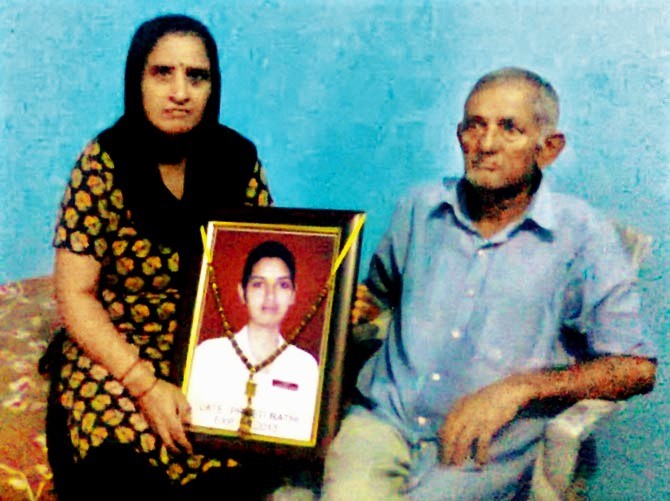 New Delhi : More than three years after a Delhinurse, Preeti Rathi, died following an acid attack, a Special Women’s Courton Tuesday convicted her obsessed neighbour Ankur Narayanlal Panwar for murder. Additional Sessions Judge A.S. Shende found Panwar, 27, guilty of Murderand causing grievous hurt by throwing acid under the Indian Penal Code.
“The convict had a one-sided love for the victim. He even asked her not to travel to Mumbai and the girl had rejected his marriage proposal,” Special Public Prosecutor Ujjwal Nikam told the media after the verdict. “Out of jealousy, the convict attacked her with acid, which he purchased from New Delhi,” Nikam said. The arguments on the quantum of the sentence will be taken up on Wednesday.

A resident of Narela in New Delhi, Rathi, 23, was attacked by acid thrown at her by Panwar shortly after she alighted from the Garib Rath Express train at Bandra terminus on the morning of May 2, 2013. She succumbed to multiple organ failure on June 1 that year on account of the severe acid burns.

Panwar had covered his face with a handkerchief and it became practically impossible for the investigators to identity him though Rathi had named him as one of the possible suspects. Both the victim and the accused – who was nabbed eight months after the crime was committed – were neighbours and family friends in Bhakra Beas Management Board Colony. He was nabbed on January 17, 2014 by the Mumbai Crime Branch from his New Delhihome after discarding all other suspects.

The needle of suspicion pointed at Panwar only very late as his family and the victim’s family were close friends. He later confessed to jealousy as the motive behind his attack since she had got a good, well-paying job but he remained unemployed. Rathi had secured a job as a lieutenant with the Indian Navy’s INS Ashvini Hospital in Colaba and had come to Mumbai to join duty.

Panwar claimed he was taunted and insulted by his own family members and neighbours for his inability to get work while Rathi managed to secure a prestigious assignment with the Indian Navy.

Though he eluded investigators for eight months, Nikam said that call data records of Panwar, when tallied with the railway time tables, showed that he had travelled on the same train as the victim. It proved he was present at the spot at the time of the crime in Mumbai though his (Panwar’s) family had earlier claimed he had gone to Haridwar and the Rathi family said they had not seen him on the train. During the hearings, Nikam brought forth how just days before the brutal acid attack, Rathi had confided to a friend about the death threats she got from Panwar.