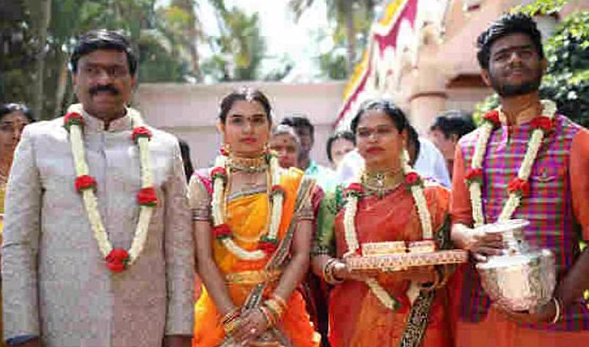 Bangaluru, 16 Nov 2016 : The lavish wedding of former Karnataka minister and mining baron Gali Janardhan Reddy’s daughter on Wednesday raised eyebrows for its pomp and grandeur — held at a time when millions are queueing up outside banks and ATMs for cash.

Over 50,000 people thronged the wedding venue at the Bangalore Palace to wish and bless the couple.

“At the auspicious time in the early hours, Rajeev Reddy, 25, tied the nuptial knot with bride Brahmani, 21, amid chanting of Vedic hymns by dozen priests in accordance with the Hindu tradition,” Reddy’s associate Manju Swamy .

Billed as one of the most expensive marriages in the sub-continent, the five-day grand event drew all-round flak and envy.

“It is unfortunate that a daughter’s wedding was made an issue out of envy and rivalry though it’s a cherishing moment for her parents, who wanted to celebrate the event befitting their family status in society,” asserted Swamy.

The 49-year-old Reddy, a former BJP lawmaker, is on bail after languishing 40 months in jail for his alleged involvement in the multi-crore mining scam that rocked the southern state in 2010-11.

Though Reddy was maintaining low profile after his release in January 2015 on conditional bail by the Supreme Court, an expensive marriage invitation sent out with a LCD screen playing a pre-wedding video raised eyebrows and brought him back into limelight.

“As Brahmani is his only daughter, a doting Reddy wanted to perform her wedding in a grand style and differently so that people could remember it for long and make it a benchmark,” Swamy pointed out.

Ahead of the fat wedding, Reddy told reporters on November 10 at his home town, Ballari, that he would give marriage expenditure account to the income tax department in a month.

However, he had declined to share its estimate with the local media.

“You (journalists) can also obtain information under the Right to Information Act and make an interesting report,” Reddy said on the occasion.

Ballari, in the state’s northwest mining district, is about 300 km from Bengaluru.

T. Narasimha Murthy, 52, a Bengaluru-based legal activist, alleged that Reddy was splurging a whopping Rs 500 crore on his daughter’s wedding at a time when people were struggling daily to get their money from banks and post offices.

“I have submitted a memo to V.L. Balakrishnan, Directorate General of Income Tax, on Tuesday to investigate how much money Reddy was spending on his daughter’s wedding,” Murthy.

Reddy had hired the royal palace for five days starting November 12, invited several film stars from Chennai, Hyderabad and Mumbai and other celebrities for the reception, the activist said.

Murthy also added that Reddy had got a replica built of the Vijayanagara empire at the venue and flown in cultural troupes from abroad, including Brazilian dancers.

Except for a local news channel, funded by Reddy, media was barred from covering the wedding, as it was a family event and also due to security concerns.

“Reddy had hired about 3,000 bouncers and security guards to prevent media and activists, like me, from barging into the venue and asking him on the vulgar display of his ill-gotten wealth he amassed through illegal mining,” said Murthy.