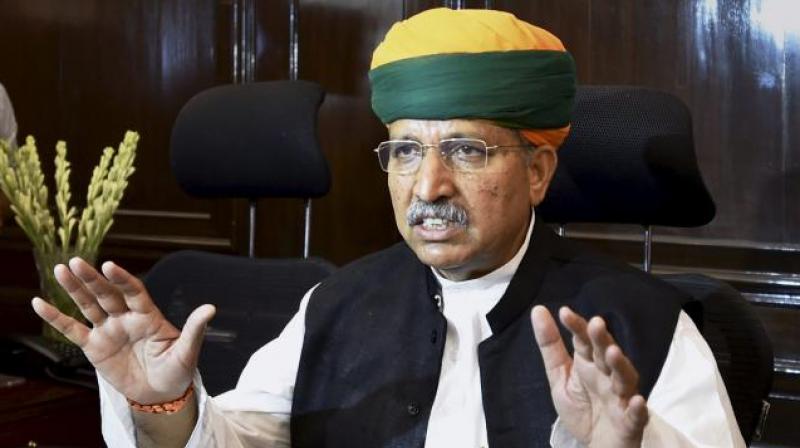 New Delhi, 16 Nov 2016 : Minister of State for Finance Arjun Ram Meghwal on Wednesday said that the information on printing of currency notes was a secret matter and its details could not be made public.

He, however, sought to assure the people that the presses have sufficient capacity and enough currency is being printed, even as long queues outside banks and ATMs continued a week after the demonetisation move.

“Printing of notes is a secret matter, the details cannot be disclosed. Answers to queries like when did the printing of new notes begin, where are they being printed cannot be revealed,” Meghwal .

How many currency notes the presses are minting everyday cannot be revealed, but the government can assure that the capacity of these is “more than enough” to meet the demand of people, he said.

Asked about the serpentine queues before banks and ATMs for the eighth consecutive day after the November 8 demonetisation announcement, Meghwal said: “The bank branches are working well. Recalibration of ATMs will be successful in 1-2 weeks. After that new Rs 500, and Rs 2,000 notes will come in ATMs. As soon as the ATMs are recalibrated the speed of withdrawals will increase.”

He said everyone was welcoming the action taken by the government. “Even the younger generation is in favour. Only a few people are creating panic-like situation,” he said.

The minister said the suggestion for indelible ink marks on those coming to exchange old notes has been implemented in major cities from Tuesday, and would help in reducing the queues outside banks and ATMs.

“It (indelible ink) was a suggestion from the public that we liked and accepted,” he said.

Elaborating on the planning that went behind carrying out demonetisation on such a large scale, Meghwal said: “It was kept a complete secret. We were continuously cautioning the people through formation of SIT, benami property law, Income Declaration Scheme, etc. We were preparing people for this. This was our agenda since 2014.”

Apart from the thousands standing in queues, bank officials are also strained due to the daunting task ahead. They blamed it on cash arrival not being “up to the optimum”.

Kavya, a banker with the HDFC Bank, told IANS that they were neither averse to the decision of demonetisation, nor to working overtime, but the cash crunch was a big worry.

“An ATM can only hold up to Rs 2.5 lakh in 100 rupee denomination and with these machines not recalibrated to dispense the new Rs 2,000 notes, the queues outside the ATMs are getting longer,” she said.

The money at ATMs is also dwindling fast as most people are taking out the maximum allowed Rs 2,500 — the limit fixed per transaction — leaving many high and dry owing to shortage of currency notes.

An official at an Axis Bank branch admitted of “big time problems” but said that like others, they too hoped that things will improve soon.