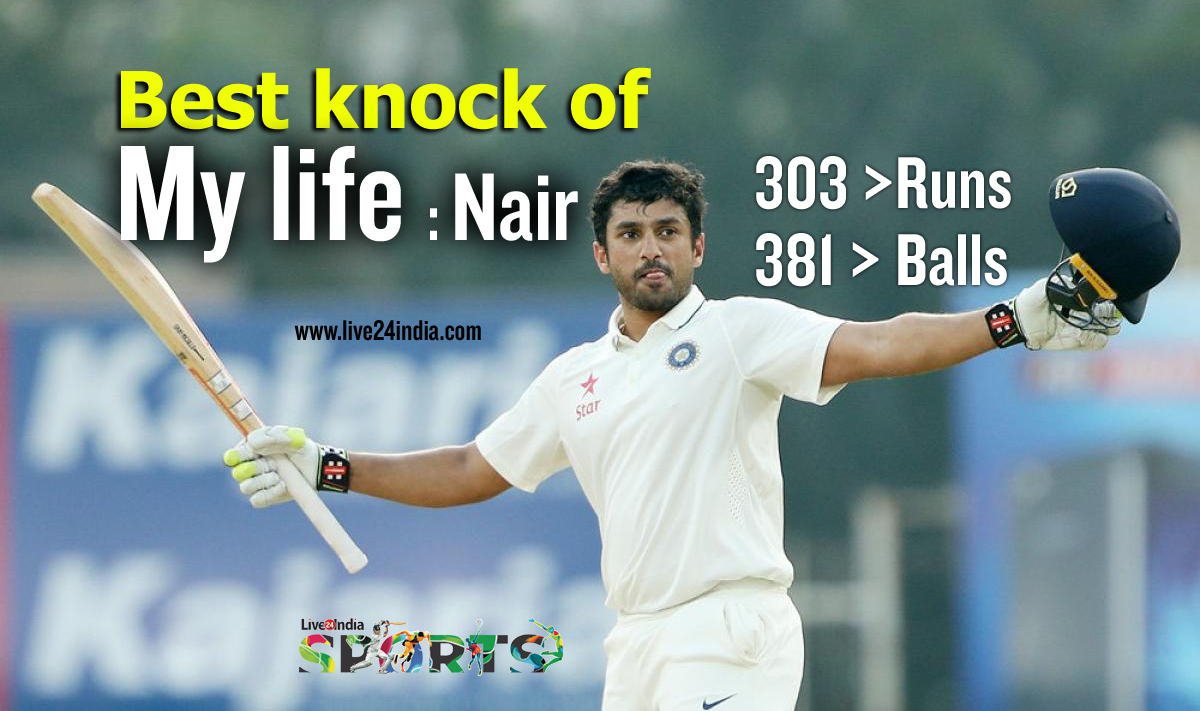 Chennai, 19 Dec 2016 : After becoming the second Indian cricketer to score a triple century in a Test innings, middle-order batsman Karun Nair on Monday described his unbeaten 303-run knock as the best of his budding career.

The right-hander remained undefeated at 303 at stumps on the fourth day of the fifth match against England here, reaching the landmark in the 191st over of India’s first innings at the M.A. Chidambaram Stadium here on Monday.

Nair reached the milestone off the bowling of leg-spinner Adil Rashid when a misfield at point resulted in a boundary that brought up his triple-hundred, thereby helping Nair become the first Indian to turn his maiden hundred into a triple.

Nair’s 303 runs was the third highest individual score by an Indian in Tests, after former opener Virender Sehwag, who heads the top scorer’s list with two triple centuries. Sehwag scored 319 against South Africa here in Chennai in March 2008 and 309 vs Pakistan in March-April 2004 at Multan in Pakistan.

“Best knock I have played in my life. Many situations in the middle when I had to play differently, with Rahul, Ashwin and Jaddu (Ravindra Jadeja). I have to thank them for supporting me, egging me on. The first hundred is always important and I think when I got the first hundred, I didn’t feel any pressure. I was just playing my shots after that,” he said after the end of the day’s action.

The Karnataka batsman’s achievement was made all the more sweeter as his parents were present in the stands watching him achieve the feat. Nair thanked the team management for showing faith in his abilities.

“(Family sitting in the stands) My dad watches most of my games. No extra pressure on me. I’d like to thank them for coming over. I think they should be proud of me,” he said.

“The message was to attack in the third session. We had a set overs to declare on, but when I got closer to 300, they pushed it back. I’m thankful to the team management.” Opener K.L. Rahul scored 199 to help India build a huge lead of 282 runs. But Rahul’s fine knock was cut short as he over-eagerly tried to complete his century by lashing at a wide delivery outside off-stump, only to be caught at point in the process.

When asked if he teased Rahul for the mode of dismissal and for missing out on the double hundred by a whisker, Nair said: “Rahul is a good player. He’ll get his 200 soon. The pitch is getting worse day by day. Hard for a new batsman. It’s turning a bit right now, hope it turns more tomorrow.”