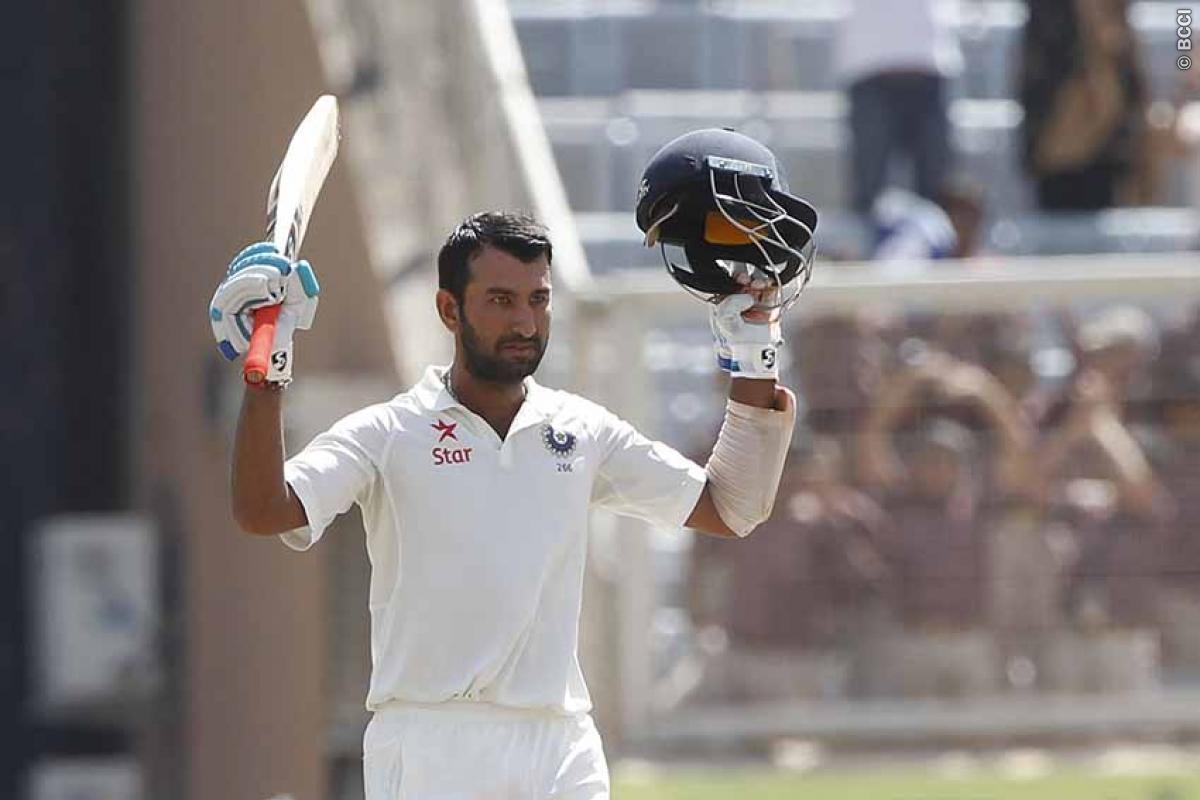 Ranchi, 18 March 2017 : Centurion Cheteshwar Pujara’s marathon effort helped India whittle down the lead to 91 runs as the hosts reached 360/6 at stumps on day three of the third cricket Test against Australia here on Saturday.

Pujara (130 not out) and wicketkeeper-batsman Wriddhiman Saha (18 not out) were undefeated after adding 32 runs for the seventh wicket when the umpires dislodged the bails for the day at the Jharkhand State Cricket Association Stadium here. The Saurashtra right-hander exhibited the kind of determination and grit which India desperately required after losing most of the top order batsmen towards the end of the third day.

Resuming the post-tea session at 303/4, Pujara and Nair batted with extreme caution as the duo added 44 runs for the fifth wicket before pacer Josh Hazlewood managed to break through the defences of Nair.

All-rounder Ravichandran Ashwin (3) got a beauty from pacer Pat Cummins that reared up from the short of a good length spot to kiss the batsman’s gloves and land in the safe hands of stumper Matthew Wade.

Contrary to Pujara’s efforts, most of the other Indian batsmen lost their wickets as a result of sheer lapse in concentration. Be it opener Murali Vijay (82), skipper Virat Kohli (6), Ajinkya Rahane (14) or Nair (23), they were all dismissed after settling down. Earlier, Pujara immediately switched gears in the post lunch session to bring up his 50 off 155 deliveries with Kohli, who defied his shoulder injury and came out to bat at his regular No.4 spot.

Forced to leave the ground in the 40th over on the opening day, Kohli spent the rest of the first day and the whole of the second day in the dressing room getting medical attention from the support staff.

However, the 28-year-old’s stay at the crease was not long as he was out for six after being caught by his opposite number Steve Smith at second slip off Cummins.

Next in, Rahane looked good during his brief stay but failed to repeat the kind of partnership which he and Pujara displayed to save the second Test in Bengaluru.

Rahane looked positive from the start, consuming 33 deliveries and added 51 runs for the fourth wicket before being caught behind by Wade off a bouncer from Cummins to leave India in a spot of bother.

The loss of two crucial wickets at the other end, however, did not deter Pujara from playing his shots as he got to his next 50 runs in just 59 deliveries. Thereafter, Nair joined Pujara in the middle and the right-handed duo ensured India went into the tea break without any more casualties.

Earlier in the first session, Vijay and Pujara played with poise to help India post 193/2 in reply to Australia’s 451 at lunch.

The duo stitched together a 102-run stand for the second wicket before left-arm spinner Steve O’Keefe (1/117) gave the Aussies something to cheer about in the last ball of the first session, taking the wicket of Vijay who played for spin but was stumped by Wade.

Cummins emerged the most successful bowler with figures of 3/49 while O’Keefe and Hazlewood chipped in with a wicket apiece. But it was definitely the banter between both the teams that kept the fans on the edge of their seats. Kohli started it first when he rushed out to the balcony and started clapping after Smith decided to use up the last review and the decision went against the visitors.

All-rounder Glenn Maxwell reciprocated the India skipper when he held his shoulder in the same fashion as the Delhi batsman did on Thursday, after saving a boundary.