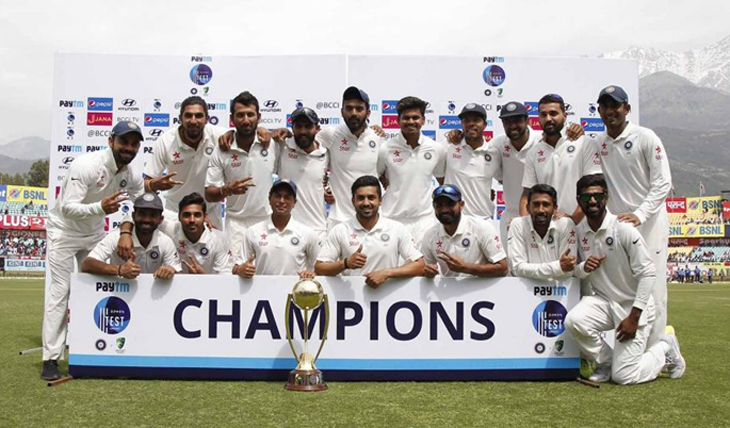 Dharamsala, 28 March 2017 : India defeated Australia by eight wickets in the fourth and final Test at the Himachal Pradesh Cricket Association (HPCA) Stadium here on Tuesday to clinch the four-match series 2-1 and regain the Border-Gavaskar Trophy.

Lokesh Rahul hit a half-century and guided the hosts to victory in the first-ever Test at this picturesque ground along with stand-in captain Ajinkya Rahane after the early departure of Murali Vijay and Cheteshwar Pujara.

Rahul remained undefeated on 51 while Rahane was not out on 38. Fittingly, it was Rahul who hit the winning runs, guiding a delivery from left-arm spinner Steve O’Keefe to the on-side.

Needing 106 runs for the win, the Indians reached the target around 90 minutes and 17.5 overs into the first session of the fourth day.

Fast bowler Pat Cummins claimed Vijay’s wicket while Pujara was run out thanks to an excellent piece of fielding by Glenn Maxwell.

India’s left-arm spinner Ravindra Jadeja was declared the man of the match as well as the man of the series. Jadeja clinched 25 wickets and scored two half-centuries over the four Tests against the team from Down Under. India captain Virat Kohli, who had to miss the fourth Test due to a shoulder injury, praised his teammates for their performance throughout the series. He also commended Rahane’s leadership in the final Test.

“Unbelievable. This is our best series win so far. I thought England was intense, but the way Australia gave us a fight it was amazing on their part. But our guys kept bouncing back. Shows the character and maturity,” Kohli said after the match.

“Ajinkya led the team really well. The changes we made in our fitness regime have paid off. Guys have been able to sustain the performance throughout the season. In the past we have had sessions where we have given away the game easily. Not this season. Been a team season.

“Not one or two individuals who have stood out. Unbelievable, the kind of fitness and desire the fast bowlers have shown, it has been game-changing,” Kohli added.

The hosts had entered the series against Australia needing to win at least one Test to retain the pole position in the Test rankings which they had reclaimed following the Indore Test against New Zealand in October last year. “Really enjoyed it. Credit to all the boys. Not only this series, but to whoever has played this season. Really happy as a captain,” Rahane said.

“I thought our bowlers, batsmen and fielders, they all did well.”

The hosts resumed at the overnight score of 19/0 and Vijay survived a scare in the very first over of the day when Australian pacer Josh Hazlewood came up with a couple of lbw appeals off consecutive balls.

The Indians got their first runs of the day in the next over when an O’Keefe delivery to Rahul turned sharply, evaded the bat and outfoxed Australian wicketkeeper Matthew Wade before reaching the boundary.

Rahul was in excellent form, taking the battle to the Australian bowlers although Vijay continued to struggle at the other end. Rahul got a lucky boundary when he tried to go after a Hazlewood delivery outside the line of his off-stump but only managed to offer an outside edge. The ball however, went between the slips and the gully to give Rahul his first boundary of the day.

The Karnataka batsman however, calmed the nerves with two boundaries off O’Keefe in the next over. He produced another superb shot off the backfoot to hit Hazlewood to the midwicket boundary a couple of overs later.

The visitors hit back by taking two wickets in the next over. Cummins, who replaced O’Keefe in the attack, dismissed Vijay with the first ball of the over when the Tamil Nadu right-hander went after a delivery which was slightly outside the off-stump only to offer an easy edge to Wade.

Pujara came in and played just five balls before some poor running between the wickets and an excellent direct hit from Maxwell from point which knocked out the middle stump forced him to return to the pavilion.

But that was the only bit of success the Australians would manage to celebrate as Rahul and Rahane batted aggressively to guide India to victory.