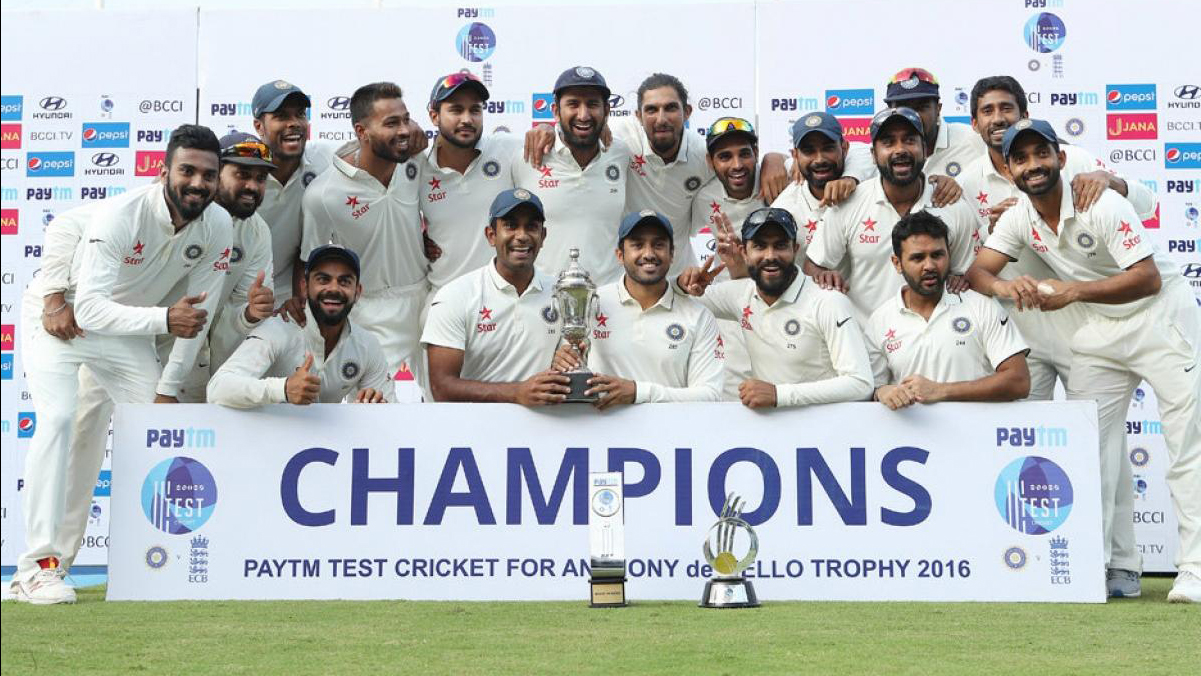 Chennai, 20 Dec 2016 : Riding on Karun Nair’s unbeaten 303 and left-arm spinner Ravindra Jadeja’s seven for 48, a ruthless India on Tuesday hammered England by an innings and 75 runs in the fifth cricket Test and clinched the five-match rubber 4-0.
The Virat Kohli-led side have now extended their unbeaten streak to 18 Tests the longest in the history of Indian cricket bettering India’s earlier record of 17 Tests without a defeat between September 1985 and March 1987.
The 4-0 victory is also India’s highest against the English side since the 3-0 win in the 1992-93 series.
Jadeja, who emerged the wrecker-in-chief in the second essay, took his overall match tally to 10 wickets with his three scalps in the first innings.
Skipper Kohli, who emerged the highest run-getter from either side (655 runs with two centuries) was named Man-of-the-Series for his efforts.
Newcomer Karun Nair (303 not out), who converted his maiden ton into triple century in India’s first innings was awarded the Man-of-the-Match.

On Tuesday, a spineless England reeled under Jadeja’s pressure in their second innings as the visitors lost their last six wickets within a span of just 15 runs to be bowled out for a meagre 207 at the M.A. Chidambaram Stadium here.
After conceding a 282-run lead, England started positively with the openers — skipper Alastair Cook (49) and Keaton Jennings (54) — setting the tone with a 103-run stand before losing four quick wickets.
England were 167/4 in their second innings at tea as the centurion in the first innings, Moeen Ali (44), and all-rounder Ben Stokes (23) offered some resistance with a 63-run fifth-wicket stand.
Coming back from the break, the Indian bowlers completely dominated the proceedings as the visitors kept losing their wickets rapidly. The English team’s vulnerability to spin was vividly exposed as seven of their batsmen — Joe Root (6), Jonny Bairstow (1), Liam Dawson (0), Adil Rashid (2), Stuart Broad (1), Jake Ball (0) and Jos Buttler (6 not out) — failed to reach the double figures in the second innings.
England resumed the day at 12/0, trailing by 270 runs, as India posted a record first innings total of 759/7 declared. Cook (47) and Keaton Jennings (46) were at the crease when the first session of the day came to a close.
But England’s slide started shortly after play resumed in the post-lunch phase.
Cook was the first to be dismissed, with his team’s score at 103 in the 40th over, edging a widish delivery off Jadeja to K.L. Rahul at leg slip. Cook’s opening partner Jennings also perished soon after, at 110/2 in the 44th over. He danced down the track to negate Jadeja’s spin but managed only to scoop a simple return catch to him.
England were jolted with the departure of both the openers.
The visitors struggled to bind together successful partnerships and slipped deeper into trouble with Root and Bairstow falling in the space of 14 balls. Root was caught in front of the wicket by Jadeja, who also had a hand in Bairstow’s wicket, latching onto a catch off the bowling of Sharma.
Earlier, India rode on the 25-year-old Nair’s (303 not out) to post their highest ever total of 759/7 declared in the first innings on Monday.
Opener Lokesh Rahul (199), seasoned stumper Parthiv Patel (71) and all-rounder Ravichandran Ashwin (67) also contributed heavily to the Indian score after England elected to bat and scored 477 in their first essay.