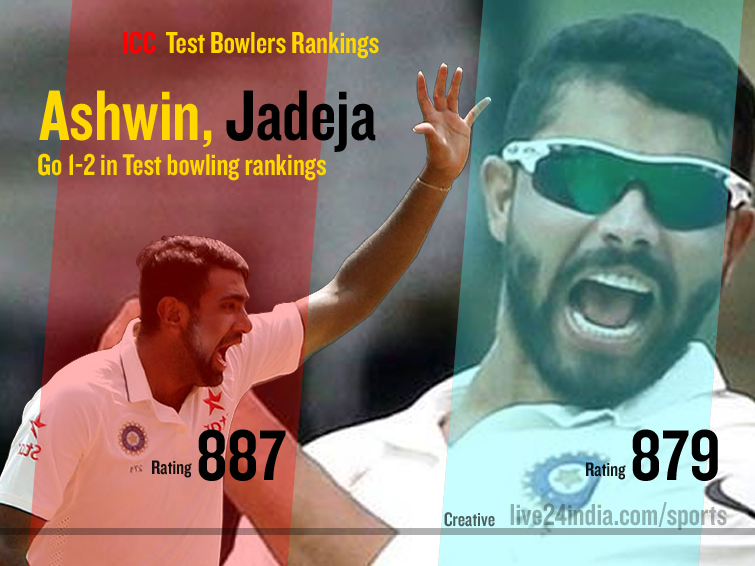 This is just the second time the top two spots in the ICC Player Rankings for Test Bowlers have been occupied by India players, with the pair emulating left-arm spinner Bishan Singh Bedi and leg-spinner Bhagwath Chandrasekhar, who were ranked one and two in 1974.

Jadeja’s performance in the series has earned him 66 points and helped him leapfrog over Josh Hazlewood, James Anderson, Dale Steyn and Rangana Herth to be positioned within eight points of Ashwin.

The Saurashtra all-rounder took 10-154 in the final Test and finished with 26 wickets in the five-match series while Ashwin ended with 28 wickets as India completed a 4-0 series victory, culminating with an innings and 75 runs win in Chennai.

Jadeja’s performance with the bat, specially the career-high score of 90 in the Mumbai Test, has helped him gain a place to reach a career best third rank in the list of all-rounders, also led by Ashwin.

Australia pace bowler Mitchell Starc is another one to rise in the rankings as he has moved up two slots to a career best sixth position after taking seven wickets in the first Test against Pakistan in Brisbane, which his team won by 39 runs to take a 1-0 lead in the three-match series.

Among others, India’s comeback man Ishant Sharma moved up two places to No. 23 while Wahab Riaz of Pakistan (up two places to a career-best 24th) and Australia’s Jackson Bird (up five places to 48th) are the others to make upward movements.

Rahul’s knock of 199 has helped him gain 29 slots to reach a career best 51st position while Nair’s unbeaten 303 in only his third Test innings has lifted him 122 places to 55th position, in the list led by Australia skipper Steve Smith and followed by India captain Virat Kohli and Joe Root of England in second and third spots respectively.

Veteran Pakistan batsman Younus Khan has moved up one place to No.8 while his teammate Azhar Ali has gained a slot to reach the 16th rank.

Another Pakistani Asad Shafiq has moved up five places to No.20 after scoring 2 and 137 in Brisbane.

Ordinance passed for e-transfer of salaries