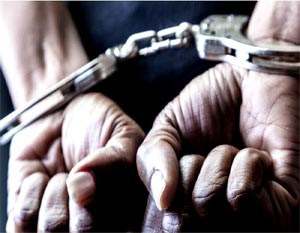 Chillar was arrested on October 21 from Colaba in Mumbai where he works with the Indian Navy, three days after his wife Lalita committed suicide. He was brought to Delhi on October 23.

Chillar was on Tuesday presented before a Metropolitan Magistrate at the end of his two-day police remand. He was remanded in judicial custody till November 8.

On October 21, Rohit’s father Vijay Singh was also sent to jail till November 4.

Notice was served on Chillar’s family on October 20 to join the police investigations but they went missing after locking their house.

Lalita, 27, was found hanging by a sash by her father Karan Singh on October 17 evening in Delhi. She was staying alone while her in-laws stayed in Kanjhawala in Delhi.

Her marriage to Chillar in March this year was her second. Lalita had accused her husband and her in-laws of harassment.

She left a two-hour audio message and a suicide note in which she wrote: “I am not strong enough to survive this, I have decided to quit.”

A case of dowry death was registered against Chillar and his parents on a complaint of Karan Singh.

Related Topics:KabaddiRohit Chillar
Up Next