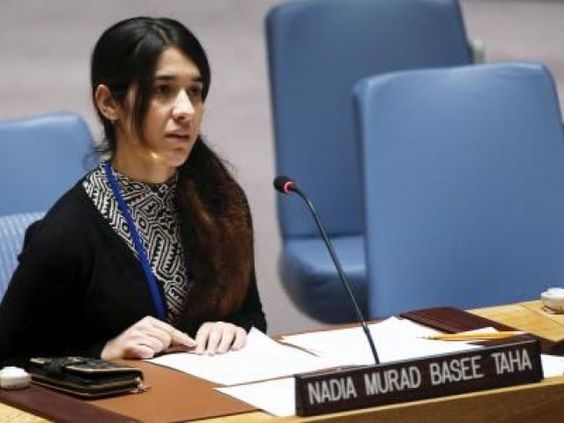 Nadia Murad was eight when Tony Blair took Britain to war with Iraq, destabilising her country so badly that IS were able to rise to power and 13 years later butcher her family and take her captive to rape again and again.

After he was damned by the Chilcot Report, Blair insisted his conscience was clear and he could “look the nation in eye”.

But to get a true measure of the consequences of his actions, Blair should meet Nadia. Her eyes would tell of the bloody legacy of that decision, in the physical and mental scars she carries.

Nadia, a member of the ancient Yazidi community despised by IS, was captured in 2014 and raped so many times, by so many men, she cannot give numbers.

She says: “Soon I stopped fighting them. I took myself to another world when they raped me.”

She was one of 5,000 woman kidnapped by IS in 2014 from the Yazidi, a secretive sect who derive many of their beliefs from Islam and Christianity but are wrongly labelled devil worshippers in areas near their homeland in northern Syria, northern Iraq and eastern Turkey.

Six of her brothers were slaughtered before her eyes, with 300 other men from her village. Her mother was also killed.

Nadia and her sisters, female cousins and nieces, were forced to “marry” IS extremists. None of the men who raped her revealed their identities, but one name that does stick out is, she says, “Sarah”.
This was the daughter of the first man who made Nadia his “sadir” or slave. The name would flash up on his mobile as he raped her. Nadia says: “I never met her or his wife, but they knew what he was doing to me. They accepted their men were raping us. To IS women, we are not worth the value of animals.”

Nadia escaped after three months, knowing she would be executed if caught. She says: “I preferred to be killed and just finally stop it.”

Pakistan MP Asks Govt Why It Is Sheltering Hafiz Saeed

Husband puts his wife up for sale on eBay