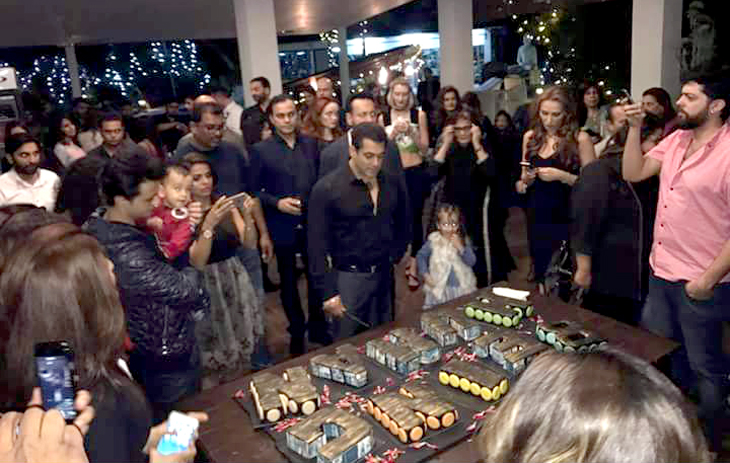 Mumbai, 27 Dec 2016 : Superstar Salman Khan turned 51 on Tuesday, and as a gift to his fans, he welcomed them into his life with the launch of his mobile application titled ‘Being In Touch’.

Salman known for portraying myriad shades on the cinematic canvas, be it his iconic ‘Prem’ avatar, zany police officer of “Dabangg” or a simpleton in “Bajrangi Bhaijaan”  rang in his 51st birthday with a grand celebration with family members and friends at his farmhouse in Panvel.

Just like his on screen and off screen image, the party was grand  as one can make out from all the photographs that have surfaced on the web.

In one, the “Dabangg” star — the son of veteran screenwriter Salim Khan — can be seen cutting ‘Being Human’ cake with his nephew Ahil. Others in attendance were Sohail Khan, Arbaaz Khan, Alvira Khan, Bina Kak, Sangeeta Bijlani, Daisy Shah, Bipasha Basu and Karan Singh Grover.

While a string of Bollywood celebrities, including Jacqueline Fernandez, Ali Abbas Zafar and Shilpa Shetty, wished him happiness, peace and a long life on the virtual world, Salman reduced the gap between his fans and his life with the mobile app. The 51-year-old actor captioned the video clip: “Being In Touch app is Live on the Google Play Store! Go download.”

The app gives fans access to all things about Salman — from all his social media pages to never-seen-before photographs, to videos of the star directly speaking to his fans and sharing interesting bits of his life with them.

It was also announced that Salman will be going international with his “Dabangg” film franchise through his first live concert in Australia and New Zealand. Titled ‘DA BANG – The Tour’. The event will be held in April and May 2017.

Salman’s journey in filmdom began with “Biwi Ho To Aisi” in 1988, but he came into the limelight following his act as Prem in the endearing love saga “Maine Pyar Kiya” in 1989.

Having essayed multiple action, romantic and comedy roles, in the past few years, Salman has hit the bull’s eye at the box office with projects like “Dabangg”, “Kick”, “Ek Tha Tiger”, “Bajrangi Bhaijaan” and his last release “Sultan”. Other than his professional endeavours, Salman is also known for humanitarian work through his non-profit charity, Being Human.

He is also one celebrity who is mostly in the news for all the wrong reasons — be it the 2002 hit-and-run case, Blackbuck case, or stirring a hornet’s nest by opposing the death penalty for 1993 Mumbai serial blasts convict Yakub Memon in 2015. He retracted the tweet later on.

He also faced flak when he was named the goodwill ambassador of the Indian contingent for the Rio Olympics. Bollywood’s “Bajrangi Bhaijaan” Salman also courted controversy by saying that training for wrestling for his film “Sultan” left him feeling like a “raped woman”.