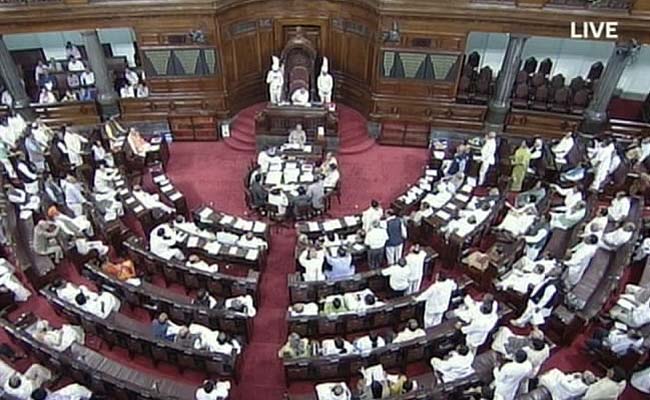 New Delhi, 5 Dec 2016 : The Rajya Sabha was on Monday adjourned for the day without conducting any business as opposition members demanded that the government immediately pays salaries and pensions to the employees and workers.

“No central government employee has got his salary (for November). The government is doing it knowingly,” charged Naresh Agrawal of the Samajwadi Party soon after the house met after lunch break.

Senior Congress leader and Deputy Leader of Opposition in the Rajya Sabha Anand Sharma also raised the same issue and said the situation has deteriorated over the weekend and people were suffering due to cash crunch.

He said unless the government fixes the problem, the situation will not improve in the house.

“We want to place this on record that no (opposition) member is opposing it (Rights of Persons with Disabilities Bill, 2014), but the bill cannot be passed in the din,” Sharma said, reacting to Deputy Chairman P.J. Kurien’s plea that the bill be passed as it is “important and non-controversial”.

Supporting Sharma, Agrawal said that no bill was ever passed amid din in the house.

The house will not work until the government fixes the problem, he added.

Pramod Tiwari of the Congress asked if the government had gone bankrupt that it cannot pay people their dues.

During the pre-lunch session, the upper house had witnessed two adjournments.

The house was first adjourned until 12 noon as opposition parties protested against the way bank customers have to struggle to withdraw their own money.

Soon after the house met at 11, Leader of Opposition Gulam Nabi Azad said people are suffering because of the cash crunch and the overall situation is going from bad to worse.

“Thousands of people met us during the weekend. No money is being given to them. They are suffering,” he said.

Azad strongly criticised the November 8 demonetisation and said ATMs even in Parliament premises are out of cash.

Reacting to it, Union Minister M. Venkaiah Naidu said: “It’s an important issue and should be debated.”

As the din continued, Deputy Chairman P.J. Kurien requested the agitating members to go back to their seats, saying the “only remedy (to the problem of demonetisation) is discussion”.

Nobody paid heed to his plea and Kurien adjourned the house until 12 noon amid chaos.

It got adjourned further until 2 p.m. after it re-assembled at noon as the opposition members kept shouting that “people’s money should be given back to them”.

Russia, US to talk on rebel withdrawal from Aleppo: Moscow