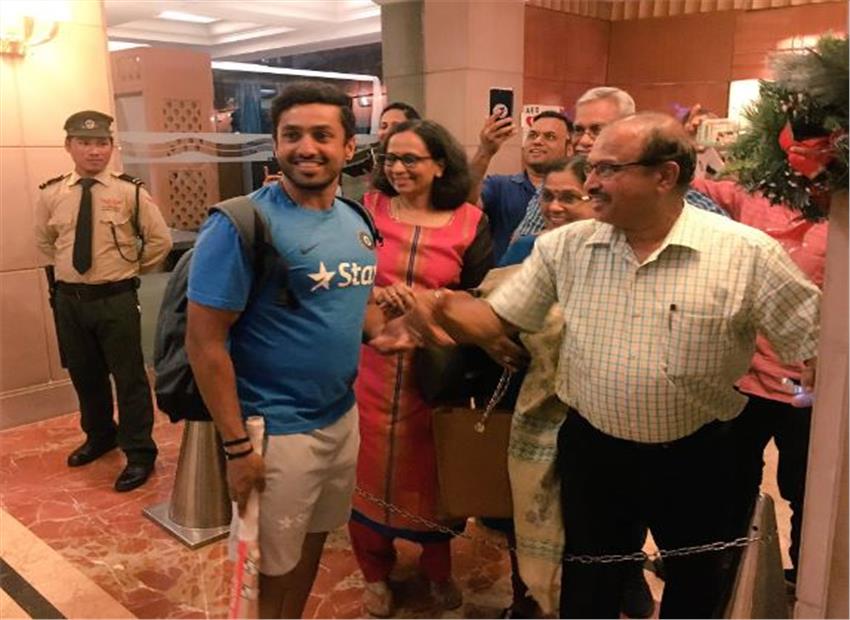 Chennai, 19 Dec 2016 :  “cricket was in his blood from age 10,” an exhilarated Kaladharan Nair said as records tumbled before his 25-year-old son, Karun Nair, at the M.A. Chidambaram Stadium here on Monday.

“We — my wife also — are in the stadium watching our son play this innings. Right from age 10, cricket was in his blood and he has come up the hard way by playing. He played five years of First Class cricket and then two years in the Ranji circuit before reaching here,” said the senior Nair to the media, mighty pleased with his son’s historic achievement.

And to a question on what he would say to his son when he meets him, he said: “Even though I am in the stadium, I will meet him only in the evening at the hotel. At the moment, I will reserve what I say to him in the evening.”

Karun wrote into record books by becoming just the third cricketer in Test history, and the first Indian, to turn his maiden hundred into a triple century — after West Indian great Gary Sobers and Australian Bob Simpson.

Nair’s mother, who too was at the stadium, said he was born premature and “the doctors advised us that he should always be made to exert and we did that and he learned cricket by playing on the streets right from a very early age”.

“We just can’t control our emotions… we just wished he don the India colours and he did that. After that, today we wished when he went out to bat that he score a century. And see, he has scored a triple,” said Karun’s mother, visibly moved.

“What more can we ask and we are certainly excited and proud. I just do not know what I will say to him when I meet him in the evening,” she added.

Nair made his Test debut in the third match in the current series against England at Mohali but scored just four runs and a mere 13 in the following Test at Mumbai. But with the selectors placing confidence in him, he finally lived up to their expectations on Monday.

Though he is settled in Bengaluru and plays Ranji Trophy for Karnataka, Nair, whose parents hail from Chenganoor in Alapuzha district in Kerala, regularly visits his home town.

Leading Kerala Ranji cricketer Sachin Baby told the media that he is really excited to hear the news that Nair has become the first Malayalee to score a century.

“I spoke to him last night and he appeared confident of what he did during the day and said he is confident of reaching the century. I feel so happy for him,” said Baby to the media here.

The last time Nair was in the news was in July when on a visit to the “Valla Sadya” celebration of the Sree Parthasarathy temple, near his home town, the boat he travelled in with around 100 others capsized. The locals swung into action and rescued him and the others.