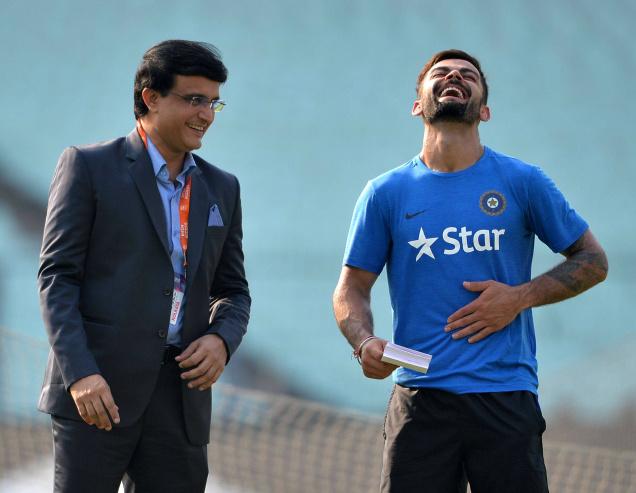 Kolkata Sep 15 : Former India cricket captain Sourav Ganguly heaped praise on current Test skipper Virat Kohli, saying the dashing right-hander is one of his favourite leaders in the game.
“Virat is one of my favourite captains at the present moment,” Ganguly told reporters at a packed media conference celebrating his decade-long association with a steel brand.
“He is a terrific player. In his short career so far he has done wonders for the country. Someone who when I look at him on the field is going to raise the value of the Indian cricket with his intensity, fighting spirit and hunger to win.”
“You could see it on his face when he walks out to bat, or captain India he wants to be the best. The country needs him at the moment and I think he is great addition to Indian cricket,” added Ganguly.
Kohli has won seven Tests as the Test captain so far, the latest being India’s massive win over West Indies in the Caribbean. The Delhi lad also became the first Indian captain to score a double century in the same series overseas.
India now take on New Zealand in three Tests and five one-day internationals. The first Test match is in Kanpur starting next Thursday.
“New Zealand are probably the second best team after England at the moment. India are almost unbeatable at home. Everyone knows that, even New Zealand,” Ganguly said.
“The first Test is in Kanpur and then here at the Eden Gardens followed by Indore. The conditions will be good to play.”
Ganguly said the Eden pitch is presently being prepared for the second Test starting September 30.
“Eden pitch will be ready. There has been a lot of sunshine in the last two days. There is still enough time to get it ready.”
The 44-year-old added the wicket will be prepared according to the wish of the Indian team management.
“Whatever they want will be provided. Last year during the World Cup, we had to use bermuda grass as it grows quickly.”

Media made me feel like a murderer, terrorist after 2007 World Cup: MS Dhoni