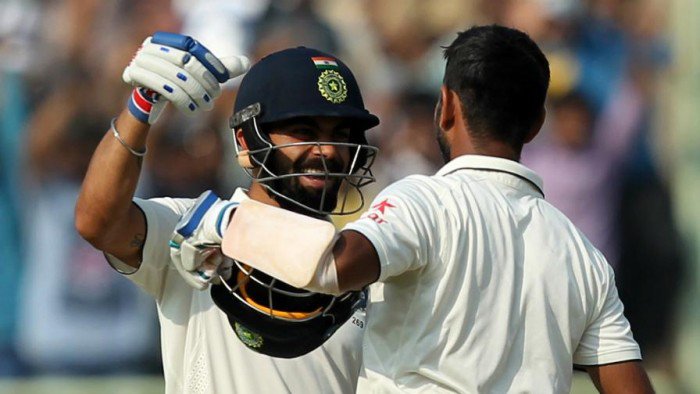 Visakhapatnam, 17 Nov 2016 : Riding on brilliant centuries by skipper Virat Kohli and Cheteshwar Pujara, India posted a commanding 317/4 against England on the opening day of the second Test match at the ACA-VDCA Cricket Stadium here on Thursday.

Kohli (151) and Ravichandran Ashwin (1) were at the crease when umpires concluded the day’s play. Pujara made 119, hitting 12 boundaries and two sixes. It was his 10th Test century and his third hundred in four innings.
Kohli then scored his 14th Test ton, riding on 15 boundaries. He is playing his 50 Test match, in which he scored his seventh century as skipper.

The Kohli-Pujara pair put on 226 runs for the third wicket, that proved to be the key element of the day and wrested the initiative from England. The visitors started the day brilliantly, reducing the hosts to 22/2 after five overs.

Kohli and Pujara ensured England couldn’t cash in on the early dismissals of openers K.L. Rahul (0), brought back to the side in place of Gautam Gambhir, and Murali Vijay (20).

Rahul, playing after shaking off a hamstring injury, lasted only five deliveries and got dismissed only in the second over the day, poking a good length delivery outside off stump into the slip cordon off Stuart Broad (1/39).

Vijay got off to a decent start, hitting four boundaries off James Anderson and Broad. But he was undone by a well-directed bouncer from Anderson, who finished with 3/44 on his return from injury. Kohli and Pujara began the innings rebuilding process on a good batting track. They weren’t troubled by the English bowlers, who tried to probe them with an outside the off-stump line.

The Indian pair balanced attack with defence beautifully, playing well within themselves, never letting pressure get to their nerves.

Seeing them playing pace comfortably, England skipper Alastair Cook tried spin to lure them into making mistakes. But they were equally at ease against the spinners.

India went into lunch at 92/2, with both the right handers looking well set.

After the duo got the measure of the pitch, they launched into the offensive, scoring at a quick pace, adding 118 runs in the post-lunch session, while posting their respective half centuries, to put pressure on England.

The partnership consolidated their dominance further until Pujara was caught behind off Anderson in the 67th over.

A stray dog disrupted the proceedings in the final over before tea, with the groundsmen struggling to get the animal off the field. The dog disruption forced the umpires to call for an early break.

But it was hardly any distraction for the dominating Kohli-Pujara duo. They took India to a comfortable 210/2 with Pujara on 97 and Kohli on 91.

After tea also, it was a smooth sailing for India until Pujara lost his concentration and got out in the 67th over to Anderson. Kohli was joined by Ajinkya Rahane (23). The pair guided India towards the close as the skipper went past 150.

But Anderson struck again with the new ball late in the day, earning England a crucial breakthrough, inducing an edge from Rahane.

India’s score would have been even more imposing had Rahane not lost his wicket in the penultimate over of the day.

Dubai, 21 September: The second match of the season played in the 13th season of the Indian Premier League (IPL) between Delhi Capitals and Kings XI Punjab at the Dubai International Stadium on Sunday was thrilled, with Delhi winning the Super Over.