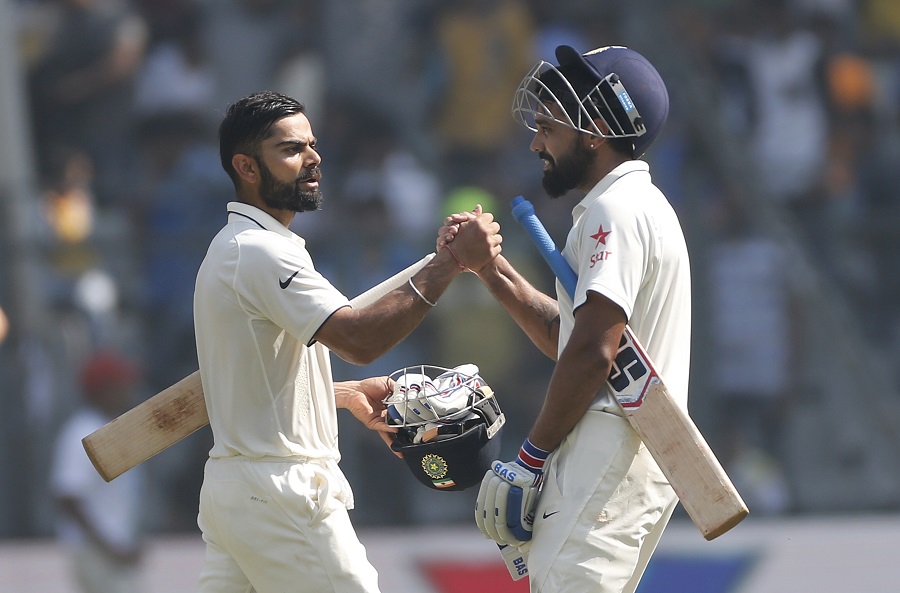 Mumbai, 10 Dec 2016 : Skipper Virat Kohli and opener Murali Vijay hit superb centuries to power India to 451/7 at stumps on the third day for a crucial 51-run first innings lead against England in the fourth Test here on Saturday.

Kohli’s (147 not out) reassuring presence helped them immensely after India were reduced to 348/6 at tea from 247/2 at lunch, in response to England’s first innings score of 400. Jayant Yadav (30 not out) was at the crease at stumps.

Vijay scored 136, his eighth ton and second of the series, to put India in a strong position from where they slipped before Kohli took control. Virender Sehwag is the fastest Indian to cross the milestone at 79 innings. Kohli reached the mark when he got to 41 runs during his knock. India were 247/2 at lunch and coasting along with opener Murali Vijay (136) striking his eighth century in the morning session.

Resuming at their overnight score of 146/1, India were jolted as early as the second ball of the day when No.3 batsman Cheteshwar Pujara (47) was dismissed off the bowling of Jake Ball (1-29).

Pujara shouldered arms to a length ball that nipped back and knocked out his off stump. But it was the only joy England could get in the next two hours of the morning session as Vijay-Kohli consolidated India’s position with a 116-run partnership.

India were comfortably placed at 247/2 at lunch, Vijay completing his century before lunch, hitting 10 fours and three sixes. India accumulated 101 runs in 31 overs in the morning phase of play.

But it all went south in the second session after Vijay was dismissed. His fall after a 282-ball knock triggered a middle order batting wobble. Kohli and Ravindra Jadeja then arrested the slide, stitching a 57-run seventh-wicket stand to guide India towards safety after being reduced to 307/6. India went into tea at 348/6 with the Kohli-Jadeja partnership unbroken.

Jadeja departed with India still needing 36 runs to level England’s score. But Kohli then encouraged Jadhav to play positively. Jadhav repaid the faith shown on him by the skipper, staying unbeaten till the end, forging an unbroken 97 run partnership for the eighth wicket.

The partnership ensured India took a potentially decisive first innings lead. Kohli, who struck 17 fours in a superb knock, would be keen to extend it beyond 100 runs when the fourth day’s play resumes on Sunday.