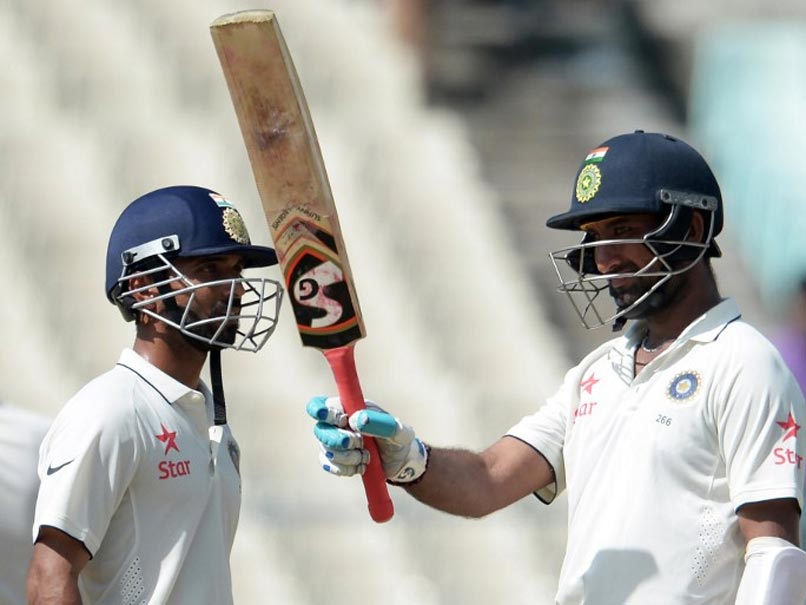 Kolkata : Cheteshwar Pujara and Ajinkya Rahane rescued India from initial jitters before New Zealand hit back with late wickets to seize the initiative on an eventful Day One of the second cricket Test here on Friday.

The hosts were 239/7 at stumps, with local boy Wriddhiman Saha (14) and Ravindra Jadeja (0) in the middle at the Eden Gardens, where around 10,000 cricket buffs turned up to watch an absorbing duel between the leather and the willow.
In keeping with the festive season, the Cricket Association of Bengal (CAB) tried to add a festive touch to the proceedings with traditinal drummers beating the dhol to celebrate every wicket and every boundary.

Opting to bat first, India lost three wickets in the pre-lunch session to totter at 46/3, with the New Zealand bowlers making the most of favourable conditions on the grassy Eden Gardens track giving much carry to the pacers.

The duo accelerated the tempo in the last session, before Pujara got out 49 minutes into the post-tea session.

The 28-year-old Pujara, in the midst of a storm over his slow strike rate, completed his third back-to-back half-century of the series during the day and was looking perfectly poised for a ton when he mindlessly went for an uppish drive against left-arm pacer Neil Wagner to finish in the hands of a waiting short cover fielder Martin Guptill.

The Indian had a strike rate of 39.72 during his innings.

India were then 187/4, but lost two more wickets soon enough within a gap of 13 runs.

Rohit Sharma (2), known for his exploits at the iconic ground, came to the park to all-round applause from the around ten thousand spectators, but did not last long.

The Mumbaikar failed to negotiate a turning delivery from off-spinner Jeetan Patel and only managed an inside edge that Tom Latham took excellently by diving at short leg. It was the New Zealander’s second catch of the day.

A little later, Patel plotted Rahane’s dismissal with an excellent flatter delivery that hit his pads plumb before the wicket.

Ravichandran Ashwin (26) and Saha were then involved in a 31 run partnership that ended when the former became Matt Henry’s third victim of the day.

Pujara gave an exhibition of classy batsmanship to complete his tenth half century in 37 Test matches by steering Neil Wagner to the fence past backward point shortly after lunch.

He played in his typical gritty manner, but was also ruthless on the loose balls.

He reached his half century by steering Wagner to the fence past backward point, the landmark coming off 146 balls after a 185-minute stay. But 44 of those runs came courtesy 11 boundaries.

In the morning, India struggled to reach 57/3 at lunch with New Zealand bowlers seizing the initiative on a lively and grassy track that gave their pacers, particularly Matt Henry, carry from the wicket, and they repeatedly went tantalisingly close to finding the batsmen’s outside edge.

Both Henry and Trent Boult bowled to a plan, maintaining a line on or just outside the off-stump.

India began on a wrong note losing both the openers Shikhar Dhawan (1) Murali Vijay (9) by the first drinks interval.

Skipper Virat Kohli (9) also failed to break his Eden Gardens jinx in the longest format of the game.

The dashing batsman chased a ball wide outside the off stumps and finished in the hands of Tom Latham at gully. It was a brilliant catch as Latham virtually plucked the leather from thin air.

Kohli has now totalled 38 in four Test innings at the Eden, at a niggardly average of 9.50.

New Zealand got a huge jolt before the match as their skipper and batting mainstay Kane Williamson was ruled out due to indisposition with Ross Taylor becoming the stand-in captain.

For the visitors, Henry (3/35) and Patel (2/66) were the most successful bowlers, though Boult (1/33) also bowled with much fire during the day, that concluded with four of the scheduled overs yet to be delivered.

India made two changes from the team that played the first Test at Kanpur. Shikhar Dhawan replaced the injured Lokesh Rahul, while Bhuvneshwar Kumar made it to the final XI in place of Umesh Yadav.

The visitors went with three changes. Henry Nicholls, Henry and Jeetan Patel are part of the team in place of Williamson, Mark Craig and Ish Sodhi