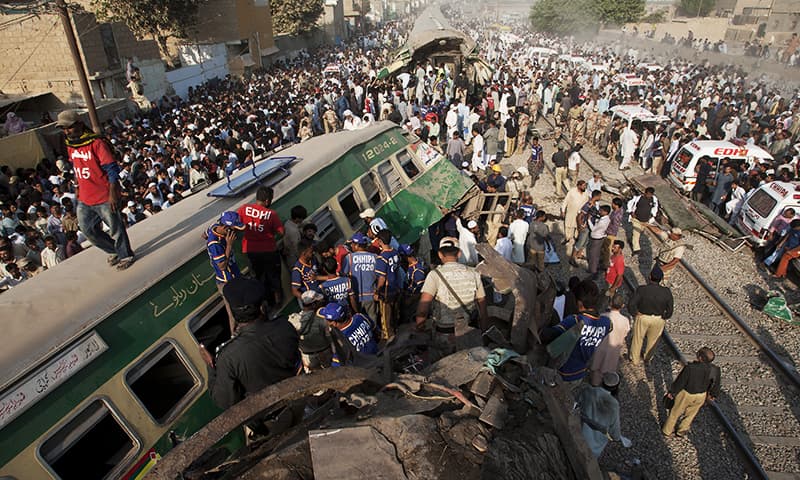 Islamabad, 03 Nov 2016 : At least 20 people were killed in the collision of two passenger trains on Thursday near Karachi’s Landhi Railway Station, police said.

The collision occurred between Zakaria Express and Fareed Express. At least three carriages were damaged in the collision, which, initial reports revealed, occurred due to faulty signals. The accident left scores injured, the Express News reported.

Witnesses described watching in horror as one train sped into the city’s Quaidabad Railway Station and rammed into the second, which was parked there, with the roar of the crash swiftly followed by the screams of people trapped inside.

Officials said rescuers armed with metal-cutting equipment and heavy cranes managed to pull all the passengers out from the twisted wreckage.

“The deaths have now risen to 20, the condition of several more is critical,” said Seemi Jamali, a spokesperson at Jinnah Hospital.

Up to 60 people have been injured in the crash, said Nasir Nazeer, an administrative official in Karachi.

All train traffic between Karachi and the rest of the country was suspended after the collision.

Addressing the media, Federal Minister Saad Rafique said the collision occurred due to the negligence of the driver and assistant driver of the train coming from behind. “The drivers first ignored the yellow signal and then the red signal.” Rafique announced a compensation of Pakistani Rs 1.5 million for the family of each killed and Rs 3 lakh for the injured.

Prime Minister Nawaz Sharif has expressed grief over the accident.