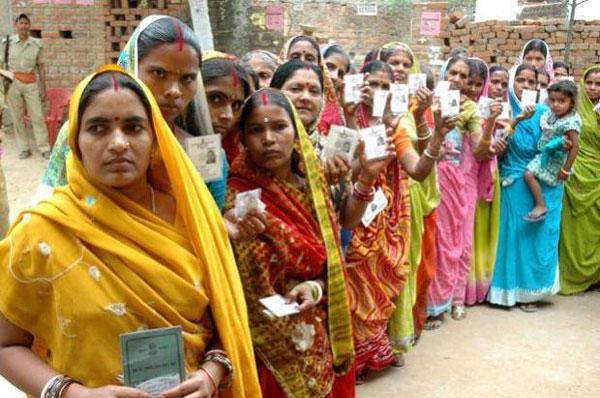 Lucknow/New Delh, 23 Feb 2017 : Over 61 per cent voters exercised their franchise on Thursday across 53 seats in the fourth phase elections to the Uttar Pradesh assembly.

The voting percentage is likely to go up.

“The voting percentage was 61 per cent till 5 pm. We hope it will go up to 63 per cent,” Deputy Election Commissioner Vijay Dev told reporters in New Delhi.

The seats that went to the polls were spread across the Bundelkhand region apart from districts of Allahabad, Koshambi, Pratapgarh and Rae Bareli.

He said the Election Commission had recovered Rs 13.49 crore in cash and liquor worth Rs 8.17 crore in the run up to the polling in the fourth phase.

The voting was slow in the morning but picked up pace as the day progressed.

Skirmishes had erupted in Pratapgarh between Bharatiya Janata Party (BJP) and Bahujan Samaj Party (BSP) activists and in Mahoba between workers of the ruling Samajwadi Party and the BSP.

Residents of some villages boycotted the polls to protest lack of development and basic amenities.

Samajwadi Party had done well in these constituencies in 2012 election, winning 24 of 53 seats. The Congress had won six seats in the last polls while the BSP had won 15, BJP five and Peace Party three.

Over 1.84 crore voters were eligible to exercise their franchise in the election.

As many as 680 candidates were in the fray including the maximum 26 from the Allahabad North constituency. There were 61 women candidates.

Sonia Gandhi, who has not campaigned for the Uttar Pradesh assembly polls this time due to ill health, on Thursday made an appeal to the people of Amethi and Rae Bareli through a video message to vote for the Congress.

Her message came a day after she sent out an appeal to voters in a letter.

Uttar Pradesh is witnessing a seven-phased election to 402 of 403 seats (election on one seat has been countermanded) which will conclude on March 8.