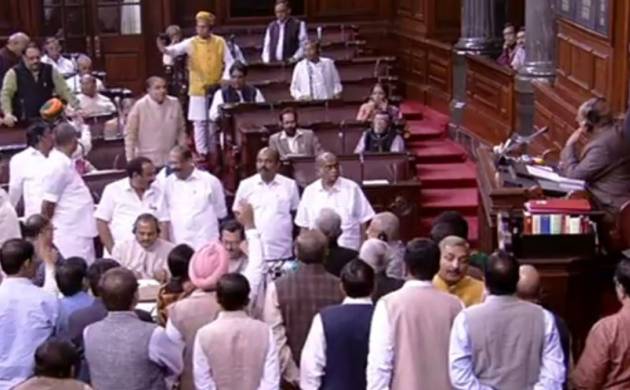 New Delhi, 23 Nov 2016 : The Lok Sabha was adjourned for the day on Wednesday as the opposition parties noisily protested to demand a debate on demonetisation under provisions of voting. The government refused to budge. As the lower house met after an adjournment at 12 noon, Speaker Sumitra Mahajan permitted members from the opposition and treasury benches to speak on the issue of having a debate on demonetisation of Rs 500 and Rs 1,000.

Most opposition members demanded that the debate should take place under Rule 56 even as the Biju Janata Dal and Telangana Rashtra Samiti (TRS) said they had not given adjournment notices.

Congress leader Mallikarjun Kharge said the opposition was ready for a debate and accused the government of not wanting to debate the issue which has sparked a cash chaos across the country.

“The Prime Minister says that a few people are supporting black money… They do not want a discussion here,” he said.

Trinamool Congress leader Sudip Bandopadhyay said the Prime Minister does not belong to a party but to everyone and he should listen to the opposition.

“Around 300 MPs staged a sit in protest near the Gandhi statue (in Parliament complex). The government has a majority here, even if there is voting they will win,” he said.

Communist Party of India-Marxist leader P. Karunakaran said some parties in the ruling NDA were also against demonetisation and named the Shiv Sena.

Shiv Sena MP Anandrao Adsul, however, maintained they were not against the move but the party has raised the issue of inconvenience caused to the people with Modi.

“The Prime Minister has assured us there will be relief,” he said.

BJD leader Bhartruhari Mahtab and TRS leader A.P. Jithender Reddy said their parties have not given an adjournment notice but want a debate. They urged the ruling and opposition members to let the debate take place. They demanded a discussion under rule 193.

Shiromani Akali Dal’s Prem Singh Chandumajra also backed the government and said although people were standing in queues, they supported the demonetization.

“Let the discussion take place… People want the house to function and debate. The whole nation is backing the Prime Minister.”

Naidu also said that an adjournment motion was accepted only in an emergency situation.

“In the Rajya Sabha, the discussion began on the first day but suddenly they changed their stand. They don’t seem serious about it.”

Parliamentary Affairs Minister Ananth Kumar expressed his concern that no business was being transacted in the house since the beginning of the session because of the opposition.

He urged the opposition to initiate the discussion.

After listening to the members, the Speaker decided to disallow the adjournment motion, which created a massive uproar among the opposition members. The house was then adjourned for the day.

Earlier, the opposition continued to demand a debate. Opposition members trooped near the Speaker’s podium after the house met.

Modi was in the Lok Sabha when it assembled at 11 a.m.

“Congress has been in power for 60 years. This behaviour does not suit them. This is against the rules, they should not do this,” Ananth Kumar said.

As the disturbances continued, the Speaker adjourned the house till noon.