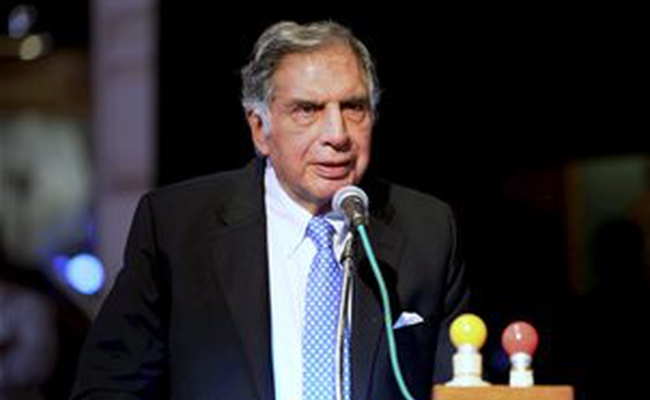 Mumbai, 23 Dec 2016 : Tata Sons Interim Chairman Ratan Tata on Friday said attempts have been made to damage his and Tata Group’s reputation.

“Over the last two months there has been a definite move to damage my personal reputation and the reputation of this great group – the Tata group,” Tata told the Tata Chemicals’ extra-ordinary general meeting (EGM) held here on Friday.

“And these days are very lonely because the newspapers are full of attacks, most of them unsubstantiated but nevertheless very painful. And coming here this week with all the shareholders, I have been so moved emotionally and deeply touched by the warmth and the support and the affection that they have shown.”

“I could not leave here today without at least expressing my deepest gratitude to the shareholders. It has been a pleasure to be with you. It could have gone either way but your support has been overwhelming and remarkable.”

According to Tata, the group has been based on governance and fair play.

“It has done more for my sense of goodwill today and this week than anything else that has happened. The group has been there for 150 years. It has been based on governance, fair play,” Tata said.

Tata Chemicals EGM has been convened to decide whether or not to remove Industrialist Nusli Wadia, an Independent Director of the company, from the Board.

The original agenda of the EGM was to take shareholders’ approval for the removal of Tata Sons’ ousted Chairman Cyrus Mistry and Independent Director Wadia from its Board of Directors.

However, on Monday, Mistry had voluntarily stepped down from his position as non-executive Chairman from the Board of Directors of Tata Chemicals.

Tata Sons’ board ousted Mistry on October 24 and appointed Ratan Tata as the Interim Chairman.

Earlier in the day, Wadia had made an impassioned appeal to the company’s shareholders to vote with their “conscience” during the firm’s EGM.

“It is in your hands to vote with your conscience for what is right for your company and more important for the institution of Independent Directors,” Wadia said in his letter, written on Thursday but made public on Friday.

Wadia said that he has chosen not to attend the company’s EGM, as the recent meetings of other Tata companies have been “inappropriately and shamefully stage managed”.

“What is at stake now is not whether I am removed or not but the fate of the very institution of the Independent Director that has been created in law and by SEBI (Securities and Exchange Board of India) to safeguard the interests of all stakeholders,” he said.

In the letter, Wadia outlined events relating to some key decisions of the Board, such as Tata Chemicals’ investment in the Brunner Mond Group of the United Kingdom, and the proposed merger of Hind Lever Chemicals Limited (HLCL) (Haldia Plant) with the company.

“Most important of all is Tata Chemicals’ investment in the Brunner Mond Group, in UK, Kenya (Magadi Soda) and the Netherlands at a cost of around Rs 800 crore,” Wadia disclosed.

The letter elaborated that Wadia, as well as some other Board members, had expressed concern about the fundamental issues involved in the overall arrangement of the deals.

“If these holdings were to be disposed off, your company would be debt- free. These cross-holdings are being maintained in a debt-ridden company only to indirectly keep the voting rights and control of Tata Sons and Tata Trusts,” the letter explained.

“Figure across all the listed companies holdings in Tata Sons is approximately 14% of its capital amounting to approximately Rs 70,000 crore,” it said.

“It is for you, the shareholders of Tata Chemicals, who own 70% of the shares of your company to decide whether you want to be the holder of Tata Sons shares with minimum return, zero liquidity and no exit.”

The development comes a day after Wadia was removed from Tata Motors’ Board of Directors.

On Thursday, a majority of Tata Motors’ shareholders at its EGM had voted to remove Wadia as an Independent Director of the company.

Tata Motors’ in a regulatory filing made to the BSE said that over 69 per cent of total shareholders of the company voted during Thursday’s EGM.

Out of the total number of shareholders who voted — 1,517 or 71.20 per cent of votes — favoured the resolution to remove Wadia from the Board of Directors.

In contrast, 1,037 shareholders, or 28.80 per cent of votes cast on Thursday, were opposed to the resolution to remove Wadia.

Wadia has also been removed as an Independent Director from the Board of Tata Steel on Wednesday.

Meanwhile, Wadia had approached the Bombay High Court, which on December 16 declined relief to minority shareholders of three Tata Group companies. They had sought restraint on promoters from voting at EGMs between December 21-23 on a resolution to remove Wadia as an Independent Director.

However, the Bombay High Court has barred Tata Steel, Tata Motors and Tata Chemicals from filling up the vacancy on the Board of Directors till further orders in the matter.