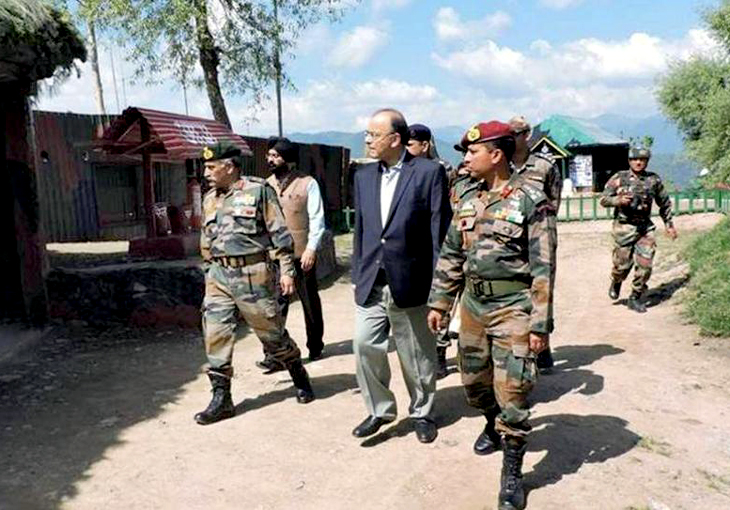 Srinagar, 19 May 2017 : Defence Minister Arun Jaitley on Friday said the government wants people of Jammu and Kashmir to have a peaceful life but security forces will act “very tough” against militants.

Jaitley on Friday visited the Army’s forward positions on the Line of Control (LoC) in north Kashmir’s Baramulla district. He said later that all security agencies were on high alert to deal with militants.

“We will go very tough on the militants, specially those who have crossed over from the other side (Pakistan), because they are responsible for the situation (in the Kashmir Valley),” he said.

The Minister, who reached Srinagar on Wednesday, reviewed security in the state.

“Violence eventually impacts security and life of ordinary residents of the Valley; therefore, the violence is not only against security forces but also against innocents who are losing their lives.

“It is a great opportunity for us to communicate to the people here that India as a country will show full concern and compassion as far as the average peace-loving citizen is concerned. We want you to have a peaceful and prosperous life.”

Earlier, Jaitley tweeted: “Had a meeting with senior commanders and troops at a forward post along the LoC, and reviewed security situation.

“The aggressive domination and readiness of the troops for befitting response to any misadventure by enemy is very satisfying,” he said.

“Jaitley said the entire country recognised the challenging circumstances the troops were operating in and stood behind them in their endeavours,” Defence Ministry spokesman Colonel Rajesh Kalia said.

Manhunt on for national hero abducted in Maharashtra