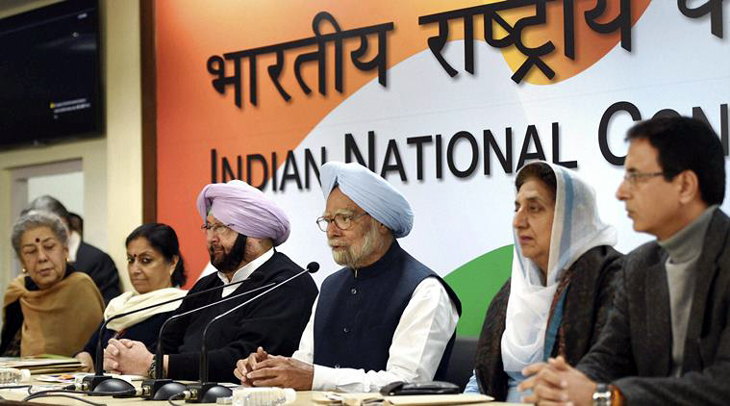 New Delhi, 9 Jan 2017 : Out of power in Punjab for ten years, Congress today promised a host of freebies like farm loan waiver and free power, smart phones, textbooks and doles to unemployed youth in the election manifesto for the state released today. Releasing the manifesto, former Prime Minister Manmohan Singh charged the Akali-BJP government with “misusing” governance in the last ten years and said Capt Amarinder Singhs leadership is “badly needed” in the state to explot the states tremendous potential.

“The challenge before Punjab is to rise above all this din and recognise that the people of Punjab need a better tomorrow. This election manifesto is a forward looking visionary document, which promises the people that we will undo the damage done to the Punjab economy by the State government in the last ten years,” he said. Hailing Amarinder, Manmohan said he is a leader of great vision who has a wealth of experience and commitment to the cause of development in Punjab.

He said Punjabs fiscal situation has been bad under the Akalis as the state has inflicted great damage on the economy and polity of Punjab being a victim of terrorism.
“Amarinders government will undo all this damage and set a new pathway for a better tomorrow which will see that people will have. A higher per-capita Income, better distribution of Income, better employment prospects and better infrastructure,” Manmohan Singh said.

The manifesto promises loan waiver and free power to farmers, wiping out of drug trade within a month, stipend of Rs 2,500 per month to unemployed youth, free smart mobile phones to youth and free textbooks to all children.

Amarinder Singh announced that the state would generate as many as 25 lakh jobs within the next five years so as to provide employment to all youth in the state.
He also promised to crackdown on drugs and corruption, and bring a new industrial policy within 90 days, besides promising an end to VIP culture, bring sweeping economic reforms and total transparency in governance. He also promised free houses to homeless dalits/SCs/OBCs and one job in every family.

He lamented that the growth rate of Punjab was down at 5.6 per cent, against the national average of 7.3 per cent, and that the state has slided from number one position to number 19 under Akalis. “We are in a very bad shape,” he said. On the contentious SYL Canal issue, he insisted there was no additional water in Punjab and that when the Assembly will be convened a law will be passed for not sharing any of the states waters.

“We are not for not giving. But, we dont have it (to share),” he said when asked about it.
Asked specifically if Amarinder was the chief ministerial candidate, AICC Secretary in-charge Asha Kumari said, “He is officially president, who is leading the party in the polls”.

No dispute between Akhilesh and me, says Mulayam