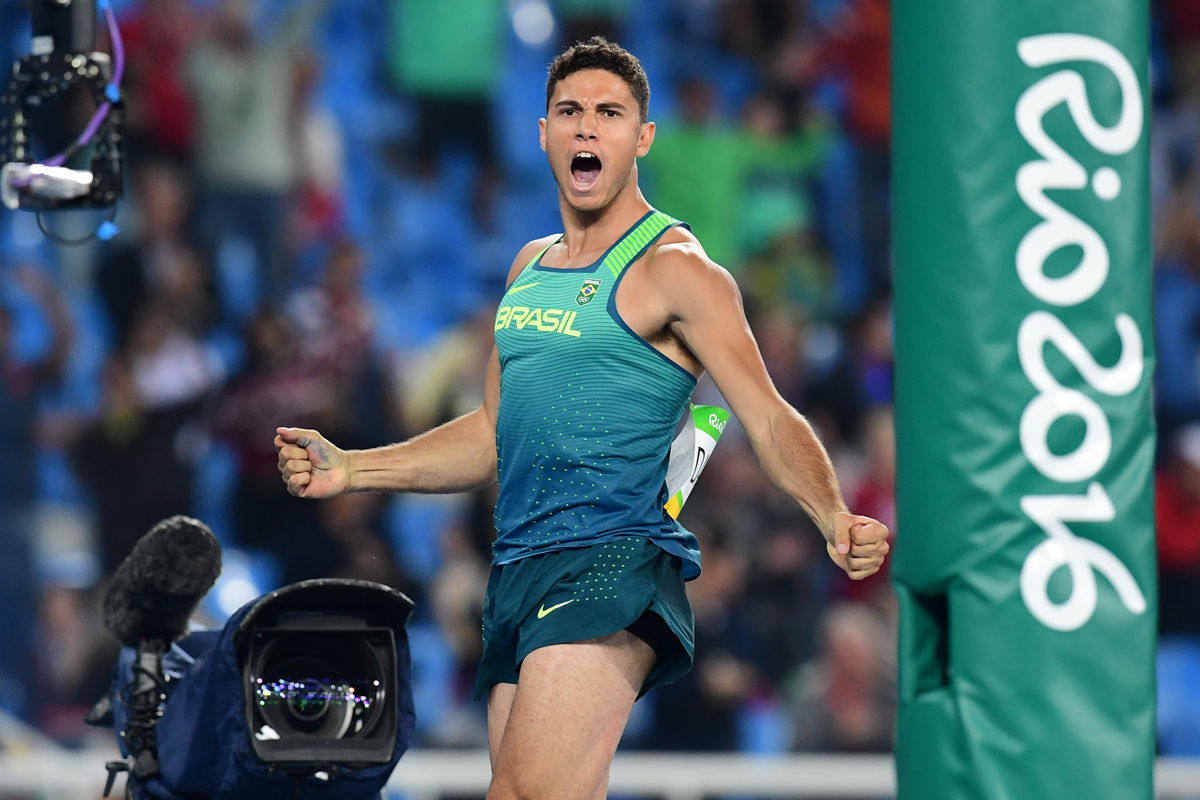 On a cool winter evening that was interrupted by a 25-minute rain delay, Da Silva lit up the home fans’ spirits by shocking France’s defending champion Renaud Lavillenie on Monday, reports Xinhua.

But it was Da Silva’s victory that will be best remembered.

The 22-year-old set a new Olympic record of 6.03m to beat his previous personal best by 10cm and send the crowd into a frenzy.

Inclement weather meant the stadium was less than half full, but the noise Da Silva generated after his last attempt was as loud as any heard at these Games.

Lavillenie took silver with a best jump of 5.98m while Sam Kendricks of the USA took bronze with 5.85m.

The Czech Republic’s Jan Kudlicka and Poland’s Piotr Lisek tied for fourth with a best effort of 5.75m.

The result gave the hosts their second gold medal of the Rio Olympics, following Rafaela Silva’s triumph in the women’s -57kg judo division.

The 22-year-old recorded a personal best 49.44 seconds to finish just seven hundredths of a second ahead of Felix. Shericka Jackson of Jamaica took bronze in 49.85.

Miller led by several metres at the final bend but had to withstand a late charge from Felix before diving over the finish line.

Slow motion replays showed the 22-year-old’s outstretched arms were just ahead of Felix.

Overcome with emotion, Miller remained on the ground for several minutes after her victory.

Felix, 30, is a three-time 200m world champion. She won the event at the London 2012 Games and was going for her fifth Olympic gold medal.

Rudisha romped to victory in the men’s 800m final, securing his second straight gold medal in the event.

The 27-year-old clocked 1 minute 42.15 seconds to finish 0.45 of a second ahead of Algeria’s Taoufik Makhloufi.

The USA’s Clayton Murphy took bronze in a personal best 1:42.93.

France’s Pierre-Ambroise Bosse was fourth in 1:43.41 and Kenya’s Ferguson Cheruiyot Rotich fifth in 1:45.55

Rudisha’s time was 1.24 seconds slower than the world record he set when winning gold at the London 2012 Olympics.

The 19-year-old clocked eight minutes 59.75 seconds to fall just 0.94 seconds short of the record set by Russian Gulnara Galkina in 2008.

“This is the second time that I missed the world record,” Jebet said. “I admit that it was too easy for me, but nobody told me about the record. I wanted the gold medal.”

Also on Monday morning, Poland’s Anita Wlodarczyk smashed her own world record to win gold in the women’s hammer throw.

The 31-year-old hurled the hammer 82.29m with her third attempt, surpassing the mark of 81.08m that she set last year.

“It’s the world record and I believed I could get the gold medal but wasn’t sure about the world record,” Wlodarczyk said. “Before the third throw I felt the power and knew it would be the best moment. After many years of hard work I’m on top.”

Wlodarczyk, who took silver in the event at the London 2012 Games, said the athletes struggled to cope with the heat inside the Olympic Stadium.

“It was extremely hard conditions and mega hot,” he said. “I had to use cold water on my head throughout the competition. This result is fantastic in these conditions.

“After the world record I felt an explosion of happiness. But now I’m extremely tired. This day is the best day of my life and I still fight to improve my result.”

Wlodarczyk has not lost a hammer throw competition since June 2014 and has posted the top 11 throws of all time.

Jamaica’s Annsert Whyte was fastest in the heats of the men’s 400m hurdles, clocking 48.37 seconds. Norway’s Karsten Warholm was next in 48.49 followed by Puerto Rico’s Javier Culson in 48.53 seconds.

Going to Pakistan same as going to hell : Parrikar