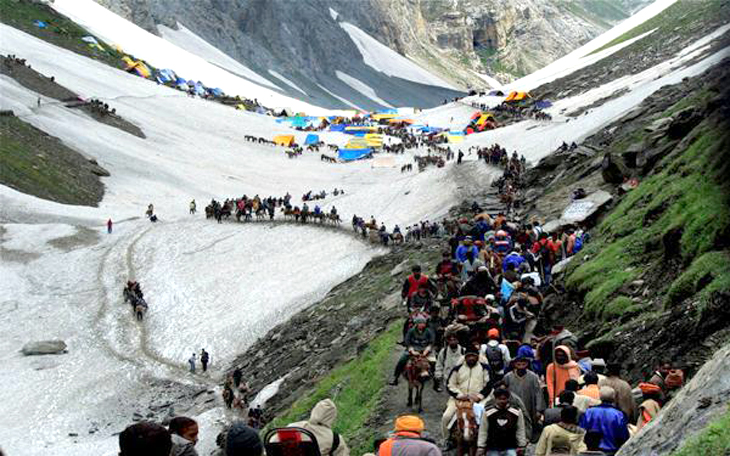 Srinagar, 11 July 2017 : Undeterred by the terror attack that claimed seven lives, the annual pilgrimage to the Amarnath cave shrine in Kashmir continued on Tuesday as thousands of devotees left for the temple with the authorities tightening security.

A blame game also started with the opposition questioning the government over “lack of action” on reported intelligence inputs about a possible terror attack on the pilgrims even as Deputy Chief Minister Nirmal Singh acknowledged that there was a security lapse.
Both in Delhi and in Srinagar, high-level review meetings were held. Home Minister Rajnath Singh held a meeting with top government officials including National Security Advisor Ajit Dovala and the chiefs of Intelligence Bureau and RAW.

The bodies of the pilgrims were flown to Gujarat and Maharashtra ‘on Tuesday. The Gujarat government announced Rs 10 lakh compensation to the kin of each of the dead from the state. Two of the dead women were from Maharashtra whose bodies were sent to Dahanu town in the coastal district of Palgarh, around 100 km north-west of Mumbai.

Authorities in Kashmir said a fresh batch of 3,289 Amarnath pilgrims left Jammu for the Kashmir Valley with a convoy of 185 security vehicles.

Hundreds more left from the base camp in Pahalgam — barely 50 km from the scene of the Monday attack — for the arduous trek to the shrine where devotees worship an ice stalagmite seen as a symbol of Lord Shiva.

Lakhs of Hindus make it in July-August to the Amarnath cave, situated at an altitude of more than 3,600 meters in the Lidder Valley of south Kashmir.

The terror strike on Monday on the Jammu-Srinagar highway in south Kashmir district of Anantnag left six women and a man dead after militants opened fire at an unescorted bus that was carrying at least 60 pilgrims on their way back from the Amarnath shrine.

Nineteen persons were wounded in the attack — only the second on Amarnath pilgrims in the nearly three decades of militancy in Jammu and Kashmir.

Police blamed the Pakistan-based Lashkar-e-Taiba for the attack and said the group was trying to stoke communal discord. But the outfit denied any role and called the attack “reprehensible”.

A possible security lapse is being blamed for the Monday attack as the bus had carried no escort and was moving after the quick response teams of the security forces had withdrawn from the highway after sundown, making the vehicle vulnerable to attacks.

The pilgrims’ movement on the highway is supposed to stop at 7 p.m.

The victims were also not registered with the Shri Amarnath Shrine Board. This is mandatory for every pilgrim, authorities said.

Union Home Minister Rajnath Singh described the attack as a “cowardice act of terror”. He hailed the people of Kashmir for their unequivocal condemnation which “proves that Kashmiriat is still alive”.

The Vishva Hindu Parishad (VHP) demanded the dismissal of the Mehbooba Mufti government for its failure to prevent the attack. The VHP will hold nationwide protests, including at Jantar Mantar in Delhi, on Wednesday.

Separatist groups in Kashmir have condemned the attack, saying it “goes against the very grain of Kashmiri ethos”.

Syed Ali Shah Geelani, Mirwaiz Umar Farooq and Yasin Malik said in a statement: “The annual Amarnath yatra has been going on peacefully for centuries and is part of our yearly rhythm and will remain so.”