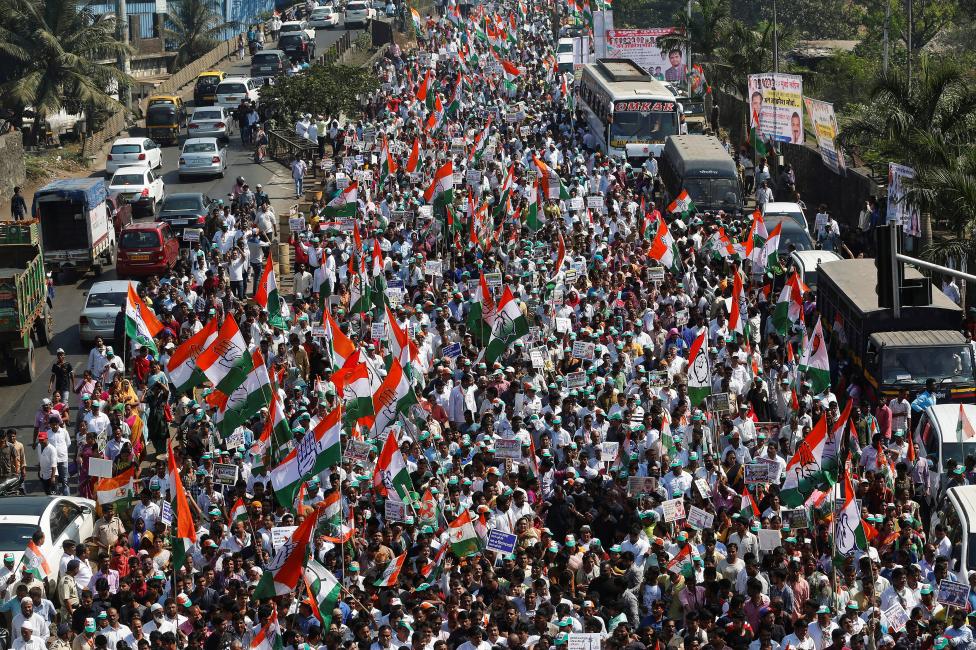 New Delhi, 28 Nov 2016 : The Delhi Congress on Monday organised a march here to protest against demonetisation of Rs 500 and Rs 1,000 bank notes, calling it “a big scam”. The ‘Jan Akrosh’ (public anger) march was led by Delhi Congress chief Ajay Maken to protest against “the faulty planning and implementation of the demonetisation drive by the Modi government”.

Hundreds of Congress workers joined the march, which started from Mandi House and headed towards Parliament to “wake up the government” to see the hardships faced by the common people following the demonetisation decision.

According to an official statement issued by the Delhi Congress, the demonetisation drive has “put the poor and the common people to unimaginable suffering and difficulties, pushing the country to a virtual financial emergency and total chaos”.

“The common people have been queuing up before banks and ATMs for hours together to draw their own money while the real black money hoarders are sitting cosy in their homes.

“Street vendors, small shopkeepers and daily wage-earners are on the verge of deprivation due to cash crunch. There is a big scam behind the demonetisation exercise,” Makan said in an official statement.

During the march, the protesters raised slogans against the central government and its demonetisation decision. They were, however, stopped by police at the Parliament Street.

“What sense does it make to waste Rs 12,000-crore investment’ in printing the notes just to put out of circulation counterfeit notes worth Rs 400 crore, not to mention the additional cost of printing new ones?

“Modi has been robbing the poor to help a few crony capitalists,” said Makan, who was accompanied by several Congress leader, including AICC in-charge of Delhi P.C. Chacko and chief spokesperson Sharmistha Mukherjee.

The opposition parties, including the Trinamool Congress, Bahujan Samaj Party, Samajwadi Party, Aam Aadmi Party and the Left parties, have been criticising the government’s November 8 move of spiking the high-denomination currency notes.

They have also been stalling proceedings of Parliament over the issue for the past two weeks now.