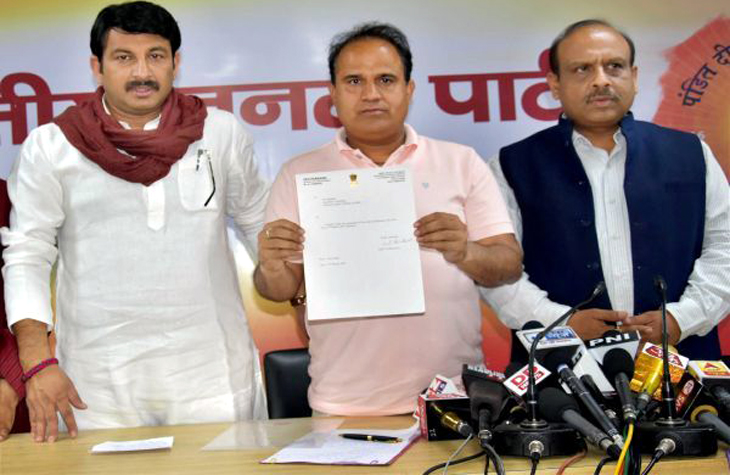 New Delhi, 27 March 2017 : AAP legislator Ved Prakash resigned from the party as well as assembly membership and joined the BJP on Monday, ahead of the April 23 elections to the three municipal corporations here.

The MLA from Bawana claimed there was no democracy in the ruling Aam Aadmi Party (AAP) and accused Chief Minister Arvind Kejriwal of not fulfilling the promises he made before sweeping the 2015 assembly elections.

“I am resigning from the AAP as it has failed to deliver on its promises made during the 2015 assembly elections. People are feeling cheated,” Prakash said.

Later in the day, Prakash resigned from the assembly membership.

Voting for the 272 wards of north, east and south Delhi municipal corporations will be held on April 23 and the results declared on April 26.

Prakash said he was feeling “suffocated” in the AAP.

“The government has failed on corruption front. Several government departments are still loaded with corruption,” he said.

Prakash claimed that 30-35 MLAs in the AAP were not happy with the party leadership.

“This party has no connect with the people on the ground. They do not know what is happening at the ground level,” he claimed.

In a brief reaction, AAP National General Secretary Pankaj Gupta said it was hard to say why Prakash left the ruling party.

New board for indirect taxes to become operational from June 1