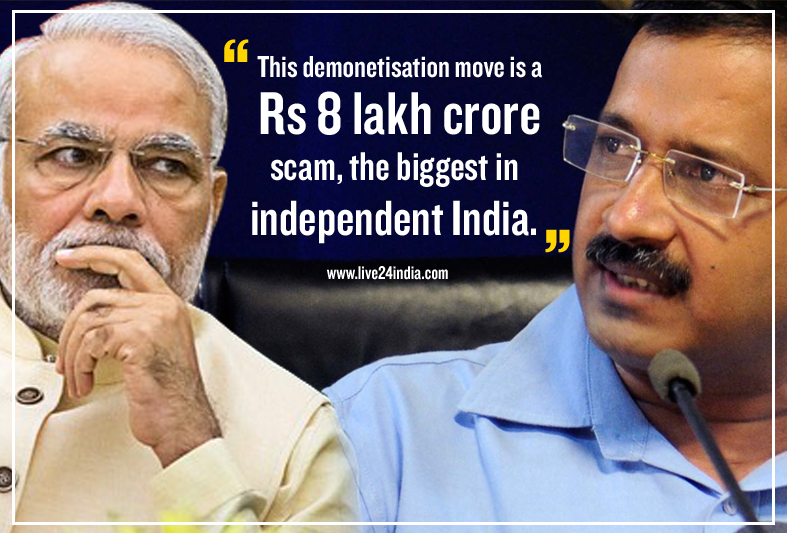 New Delhi, 19 Nov 2016 : The AAP on Saturday reiterated that the Centre’s demonetisation of high-denomination currency is the “biggest scam in independent India” and again demanded its rollback.

“What Prime Minister Narendra Modi gave to the nation is a scam in the name of demonetisation,” Aam Aadmi Party leader Sanjay Singh said.

The AAP leader told the media here that the move to demonetise 500 and 1,000 rupee notes was aimed at benefiting big corporates by waiving off their bank dues. “Rs 8 lakh crore dues are pending against his 10 capitalist friends and this (demonetisation) move is (aimed) to benefit them.”

He claimed Modi was waiving dues of big corporates who paid “bribes” to him (Modi).

Pandey said the rich people close to the Bharatiya Janata Party were unaffected by the cash chaos triggered by the November 8 demonetisation.

“The poor are the ones being troubled a lot,” he said, adding that the government should roll back this move.

AAP leader and Delhi Chief Minister Arvind Kejriwal told a news channel on Friday: “It is the biggest scam of independent India. It would be anti-national to support demonetisation in its present form.

On November 17, Kejriwal and West Bengal Chief Minister Mamata Banerjee warned of a public revolt if the Centre’s decision was not reversed in three days.