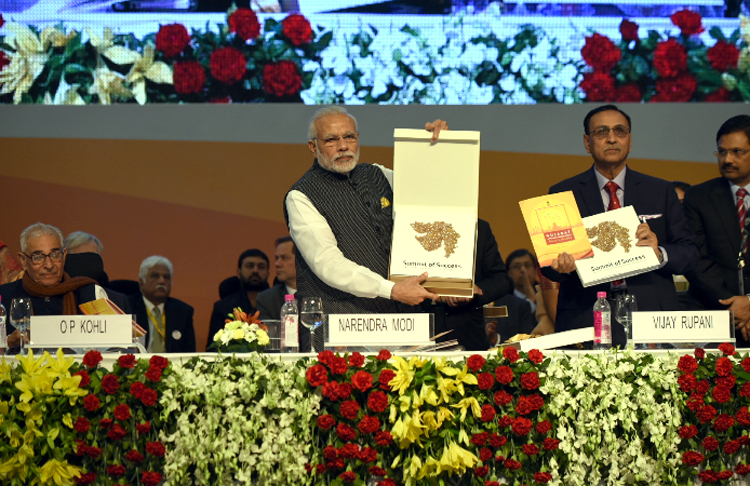 Gandhi Nagar, 10 Jan 2017 : Identifying India’s strength in its demography, democracy, and demand, Prime Minister Narendra Modi on Tuesday stressed the need for digital-based governance to bring efficiency in the country’s decision-making process and to boost the economy.

Calling “democracy” India’s biggest strength, he said: “Some people say democracy cannot deliver effective and fast track governance, but we have seen in last two and a half years, it is possible to deliver quick results as well.” “Digital technology has played a key role. I often say that e-governance is easy and effective governance. We need quality driven governance.”

“Online process brings speed and openness and decision making. We are working to adopt and absorb newer technology to bring transparency and end discretion,” said Modi.

He, however, did not make any mention of demonetisation in his half-hour speech. Modi said that India has registered excellent growth, despite the global slowdown.

“We have become sixth largest manufacturing country in the world, up from the ninth. Our growth of manufacturing has registered nine percent in 2015-16. This is much higher than the five-six per cent growth in previous three years,” he said.

He said that the government was further rationalising its policies and procedures to make it convenient for business and growth.

“India is bright spot in the global economy. World Bank, IMF and other institutions have projected even better growth in the coming days. In 2014-15, India contributed 12.5 per cent of global growth. Its contribution to global growth is 68 per cent higher, than its share of the world economy,” Modi told delegates from 12 countries and industry captains present on the dais.

According to the Gujarat government, investors and office-bearers from over 100 countries were to attend the eighth edition of the biennial event, being held here from January 10 to 13, with the central focus of “Sustainable Economic and Social Development”. Over 74,000 people have said to have registered for the summit.

Modi said that in last two and a half years, his government “had worked relentlessly to realize India’s potential and to set rise in economy”. Modi said that India’s food processing industry is expected to increase almost five-fold in next 10 years, India is now the emerging IT hub, it produces the world’s second-largest number of scientists and engineers, while the entertainment industry “is making waves worldwide”.

Gujarat Chief Minister Vijay Rupani said that the summit was not mere a summit but had become an identity.

Chargesheet against Rajendra Kumar on February 2