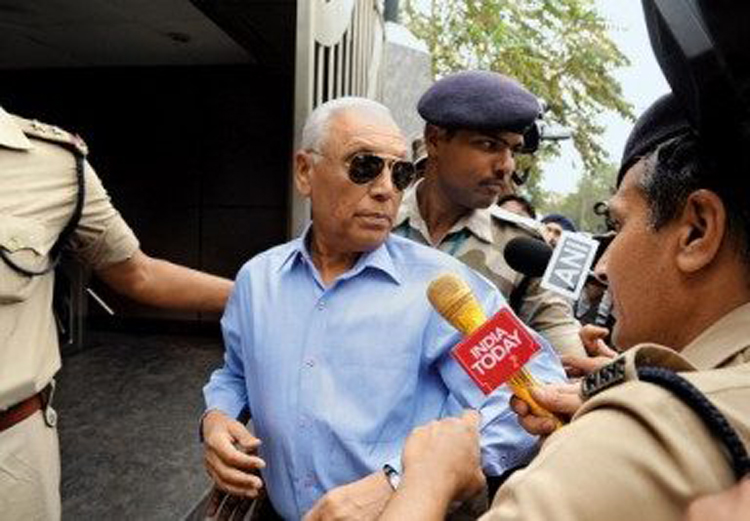 Agusta Westland case  : The changed specification of VVIP helicopters, especially the reduced the service ceiling were made under the advice of the Prime Minister Office, former IAF chief S.P. Tyagi on Saturday told a court, which sent him to the custody of the CBI till December 14 in the Rs 3,767-crore AgustaWestland helicopter deal case. New Delhi, 10 Dec 2016 : The changed specification of VVIP helicopters, especially the reduced the service ceiling were made under the advice of the Prime Minister Office, former IAF chief S.P. Tyagi on Saturday told a court, which sent him to the custody of the CBI till December 14 in the Rs 3,767-crore AgustaWestland helicopter deal case.

“Then PMO advised to keep the minimum mandatory requirement of the service ceiling of the helicopters to 4,500 metres (from the earlier 6,000 metres),” Tyagi’s defence counsel N. Hariharan told the court while opposing the Central Bureau of Investigation’s plea seeking custodial interrogration of the accused.

However putting aside the submissions, Metropolitan Magistrate Sujit Saurabh allowed the CBI to quiz Tyagi, his cousin Sanjeev Tyagi alias Julie Tyagi and Delhi-based lawyer Gautam Khaitan till December 14 even as the agency sought 10 days custody to unearth the bribery charges, saying a huge amount was routed to India through various companies.

“Considering the serious nature of the allegation and gravity of the matter, I am of the considered opinion that police custody of the accused is required for fair investigation,” said the magistrate after a two-hour-long argument between counsel of the CBI and the accused.

The agency told the court that crucial information was collected from three countries – Italy, Switzerland and Mauritius – via letters rogatory and the accused are required to be confronted with it to unearth the larger conspiracy in the deal.

Telling the court that regular meetings were taking place between senior officials of AgustaWestland and S.P. Tyagi with the help of Sanjeev Tyagi, the CBI has alleged that a conspiracy was hatched to reduce the service ceiling of the helicopters after which AgustaWestland became eligible to supply a dozen helicopters for VVIP flying duties.

It told the court that the words “at least twin engine” were inserted in the amendment proposal in 2005 for procuring VVIP helicopters to bring AgustaWestland into the eligibility criteria, adding that the changes were made deliberately as AgustaWestland helicopters had three engines and a service ceiling of 4,500 metres.

Claiming innocence in the case, the former IAF chief’s defence counsel, Hariharan apprised the court that it was a collective decision to procure VVIP helicopters.

Denying the charges, he opposed the request of custodial interrogation, saying that the probe agency had not given any specific and vital point for seeking remand.

Countering the CBI allegations, Tyagi said that, as IAF chief 2004-2007, he had nothing to do with the deal and the decision was taken collectively in in consultation with then Defence Ministry, the Special Protection Group and the PMO.

The decision came during the tenure of Manmohan Singh but was axed in January 2013 when the corruption allegations surfaced.

The CBI told court that in 1999, the government decided to phase out the old helicopters as they were not fit to reach high-altitude areas, and the Defence Ministry in 2002 issued global tenders for procuring new VVIP helicopters in which 11 companies participated including AgustaWestland.

However, AgustaWestland could not qualify for the shortlisted companies as it could not meet the eligibility criteria.

“Therefore a conspiracy was hatched by the accused person to help AgustaWestland win the chopper contract by making change in the operational requirements,” contended the CBI, saying Italian nationals and middlemen Carlo Gerosa and Guido Haschke were in constant touch with Tyagi’s cousin to influence the bidding, and also accessed crucial information.

The middlemen told Sanjeev Tyagi that they had a good contact with Giuseppe Orsi and Bruno Spagnolini, then CEOs of the Italy-based Finmeccanica and Britain-based AgustaWestland, which is a subsidiary of the former, and could fix the meeting with them, CBI disclosed.

All the accused, companies included, were booked for criminal conspiracy, cheating and under the Prevention of Corruption Act.