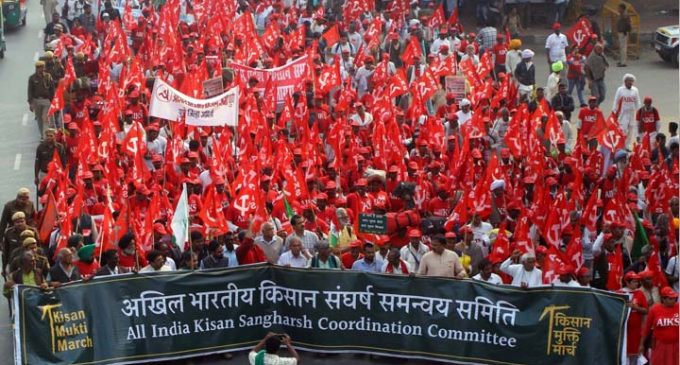 New Delhi, 29 November : Thousands of farmers from across the country on Thursday reached the Ramlila ground in the national capital for a mega protest march to Parliament Street on Friday demanding higher crop prices and farm loan waiver.

The All India Kisan Sangharsh Coordination Committee (AIKSCC), which has organised the Kisan Mukti March, has not yet been given the required permission by Delhi Police to hold the rally.
Swabhimani Shetkari Sanghatana leader and Member of Parliament from Hatkanangle in Kolhapur (Maharashtra) Raju Shetti said if permission is not granted for the rally, the working committee of the AIKSCC would decide the next course of action.

“We were told that our rally would affect traffic in the city. But what happens when traffic is stopped for hours during the Prime minister’s movemnet? Can’t they spare even one hour for farmers who are fighting for their rights?” Shetti told. Many political leaders, including Delhi Chief Minister Arvind Kejriwal and NCP chief Sharad Pawar, have confirmed their participation in the rally, he said. National Conference’s Farooq Abdullah, Trinamool Congress’ Dinesh Trivedi, Loktantrik Janata Dal’s Sharad Yadav are among the other leaders who will address the protesting farmers on Friday.

“We are protesting loot and exploitation of farmers. The entire country is with us. Journalists, doctors, students, artists have pledged their support,” said Yadav, adding Friday’s March would be “historic”.

Many women farmers and students, particularly from Delhi University, were seen in the rallies raising slogans for the cause of farmers. Two trains carrying farmers, one from Maharashtra’s Miraj and other from Bengaluru, were expected to reach Delhi on Thursday night. All protesting farmers started congregating at the Ramlila ground where a cultural programme in their honour was held.

On Friday morning, farmers would take over the road leading to Parliament to put forward their demands before the Central government. ‘The Kisan Mukti March’ will end at Parliament Street and, subsequently, ‘Kisan Sansad’ (Farmers’ Parliament) will be held, in which farm issues will be discussed and speeches will be delivered, an activist said.

Social activists, including Medha Patkar and activist-journalist P. Sainath, have extended their support to the rally and said the situation of farmers in the country has deteriorated. Also, several prominent writers, intellectuals and artists, including Nayantara Sahgal, K. Satchidanandan, Ganesh Devy and Damodar Mauzo, have expressed solidarity with the farmers.

The Friday’s rally would be fourth major farmers rally being held by the AIKSCC, which represents over 200 farm outfits. It has been protesting against “anti-farmer” policies of the BJP government following the Mandsaur firing episode last year, which led to death of six farmers.

Shetti has introduced two private member’s Bills in the Lok Sabha in 2017, seeking a loan waiver and a guaranteed remunerative prices for agricultural commodities based on the recommendations of the Swaminathan Commission. The AIKSCC has demanded a special session of Parliament so that these Bills are discussed and passed.

It said 21 political parties have extended their support to the Bills. It has also written to Prime Minister Narendra Modi to join the protest march.AA On Monday, a book authored by Yogendra Yadav detailing how the Modi government’s policies have led to a drop in farmers’ income and caused rural distress across the country was launched in the capital. BSNL employees to go on indefinite strike from Dec 3