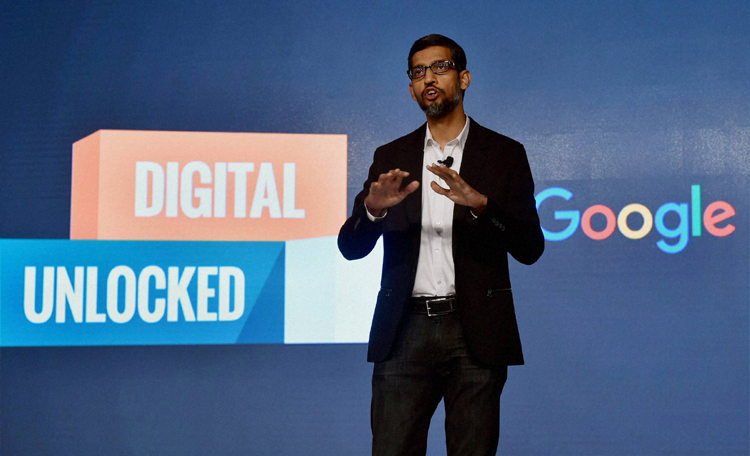 New Delhi, 4 Jan 2017 : Aiming to give a technological edge to the small and medium businesses (SMBs) in India, Google CEO Sundar Pichai on Wednesday announced two initiatives ‘Digital Unlocked’ and ‘My Business Website’.

“Small businesses are the backbone of India’s economy. Internet is for everyone,” Pichai said, addressing the media here.

“The Internet is a powerful equaliser and we are motivated to bring the benefits of information and technology to as many people as possible,” he said.

“Building for everyone and making it available in the hands of as many people is at the heart and core of what we do. And we do this by investing in open ecosystem,” Pichai added.

Pichai said that Google, along with the Federation of Indian Chambers of Commerce and Industry (Ficci), has developed a training programme called ‘Digital Unlocked’, to empower thousands of Indian SMBs with essential digital skills that would enable them to get online and start using the power of the internet to grow their businesses.

The programme would be certified by Google, Ficci and Indian School of Business – Hyderabad. It would offer online and mobile courses to SMBs across the country.

The global search giant also started another initiative ‘My Business Website’. It is a free tool, which would help make a website in 10 minutes.

“Any small business can sign up. Internet is as much for the local players as it is for a high-flying one. It will first start in India (later this year), and then will be launched in other countries,” Pichai said.

There are around 51 million small and medium scale businesses in India. Google unveiled a joint research study with KPMG titled “Impact of internet and digitization on SMBs in India”, which said that 68 per cent of the 51 million Indian SMBs were offline.

The micro small and medium entreprises contribute 37 per cent to the Indian gross domestic products (GDP), he added.

Primer also works offline and is currently available in English and Hindi. Tamil, Telugu and Marathi versions are coming up shortly.

Appreciating all the initiatives by Google, IT and Law Minister Ravi Shankar Prasad said: “Google is as much an Indian company as American.”

Five-state battle between February 4 and March 8