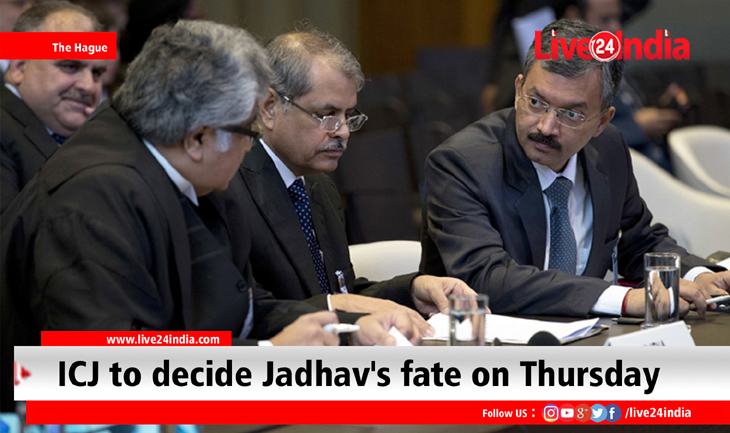 The Hague, 17 May 2017 : The International Court of Justice (ICJ) will announce on Thursday its verdict on India’s appeal seeking revocation of the death sentence awarded by a Pakistani court to alleged spy Kulbhushan Jadhav.

In a statement, the court announced that it will “deliver its order on the request for the indication of provisional

measures made by India in the Jadhav Case (India v. Pakistan), on Thursday” at noon (3.30 p.m. IST) in a public sitting.

Judge Ronny Abraham, President of the court, will read the decision, it said.

The decision comes after India on Monday sought the court’s intervention for an immediate suspension of Jadhav’s death sentence, fearing that the Indian national may be executed even before the ICJ decided the case.

Indian lawyer Harish Salve alleged that the trial of Jadhav, a former navy officer, was held under “farcical” circumstances in violation of the Vienna Convention.

The lawyer told the court that Jadhav was kidnapped in 2016 from Iran where he was pursuing his business after retiring from the Indian Navy, brought to Pakistan and was shown to have been arrested in Balochistan and presented as an alleged Indian spy.

His alleged confession admitting he worked for India’s external spy agency R&AW and his involvement in terror activities was extracted in a military custody, Salve said.

He urged the court to direct Pakistan to see that Jadhav was not executed and “no action is taken that might prejudice the rights of India or Jadhav with respect to any decision the court may render on the merits of the case”.

Jadhav was awarded the death sentence by a Pakistani military court last month, a year after he was arrested on espionage charges. Islamabad has rejected 16 Indian requests for consular access to Jadhav, held at an unknown prison in Pakistan.

Salve demanded that Pakistan should annul Jadhav’s death sentence as he was not even given a chance to defend himself.

Pakistan, however, rejected the plea on the ground that India had no right to invoke the jurisdiction of the UN’s highest court because the Vienna Convention does not provide for matters relating to spies, terrorists and those who indulge in espionage.

Islamabad also asked the court to reject India’s plea for provisional measure in the case.

India approached the ICJ on May 8, accusing Pakistan of “egregious violations” of the Vienna Convention in the matter of the detention and trial of Jadhav.

Denying the charges, Pakistan has maintained that it had requested an Indian assistance in the investigation of Jadhav’s alleged “involvement in espionage and terrorist activities in Pakistan”, which it said New Delhi did not provide.

The face-off over Jadhav has brought relations between the two rival neighbours to a new low.