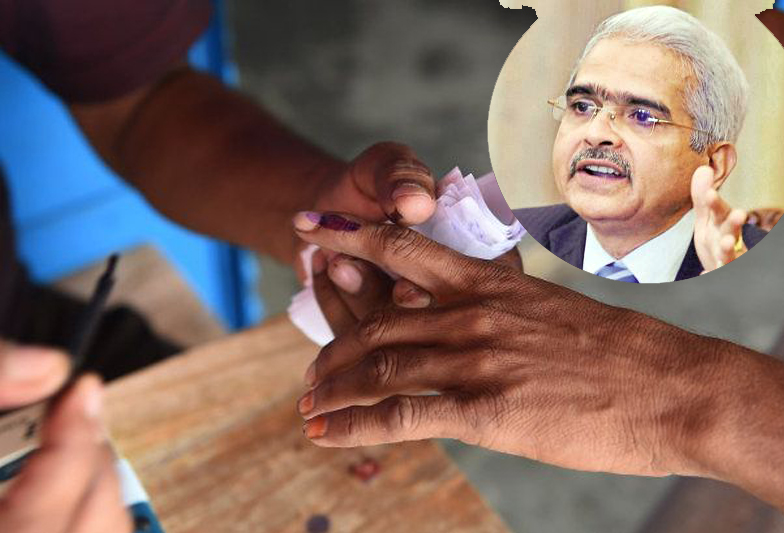 New Delhi, 15 Nov 2016 : Indelible ink will henceforth be used, as is done during elections, to prevent people from making cash withdrawals more than the permissible limit from bank counters, the government announced on Tuesday.

Economic Affairs Secretary Shaktikanta Das told the media that Prime Minister Narendra Modi held a second review meeting on demonetisation with officials of the Finance Ministry and the Reserve Bank of India (RBI) to ascertain why long queues were continuing at banks.

“It was found that in many places, the same set of people are coming to get cash. They are going from one branch to another branch. As a result, the benefit of withdrawal is getting restricted to a few people,” Das said.

“To prevent this, indelible ink marks will be made, like in elections, at the bank cash counters,” he said, adding unscrupulous elements were trying to convert their black money into white by going to different bank branches several times in a day.

Operating instructions will be issued to banks on how to use indelible ink and this process will start in all major cities from Tuesday, he said.

At the moment, the daily withdrawal limit from ATMs is Rs 2,500, while for exchange of old notes from bank counters it is Rs 4,500. This apart, the upper limit for weekly withdrawal from bank accounts stands at Rs 24,000.

The government earlier permitted old Rs 500 and Rs 1,000 notes, totalling Rs 4,000, to be exchanged till December 30. Later, the limit was revised to Rs 4,500. The government had also said the decision would be reviewed after 15 days.

Addressing reports of Jan-Dhan accounts being used by other people to deposit their unaccounted cash, Das said the government has decided to set an upper limit of Rs 50,000 for deposits in these accounts.

Das said the legitimate Jan-Dhan account holders would not be put to any kind of difficulty but the source of deposits of above Rs 50,000 into these accounts will be tracked and verified.

“A close watch is being kept on them (deposits in Jan-Dhan accounts),” he said.

“Jan-Dhan account holders should not allow other people to use their accounts to convert their black money into white. Banks have been advised to keep a close watch on cash movement,” he added.

For other accounts, Finance Minister Arun Jaitley had earlier said authorities will not make inquiries into small deposits of Rs 1.5-2 lakh.

Dismissing rumours about some institutions planning a strike against the government’s demonetisation move, he said the pictures being circulated on the social media were a year old.

To ease liquidity crunch, Das said, it was decided at the review meeting to constitute ‘technology teams’ to popularise e-wallets among people and hasten the pace of recalibrating the ATMs for the new high-denomination notes.

Jaitley had earlier said it will take two-three weeks to recalibrate the ATMs. All ATMs in India needed to be calibrated afresh to disburse the newly minted Rs 500 and Rs 2,000 notes as per their weight, dimensions, design and security features.

Among other measures, separate green channels of micro ATMs were being created in banks across the country and a task force had been formed to monitor stocking and transfer of old notes, he said.

Assuring the people of enough cash availability with the bank branches and post offices, Das added that there was no reason for panic.

Modi calls upon global community to act against terror

Why is ‘Sonam Gupta Bewafa Hai’