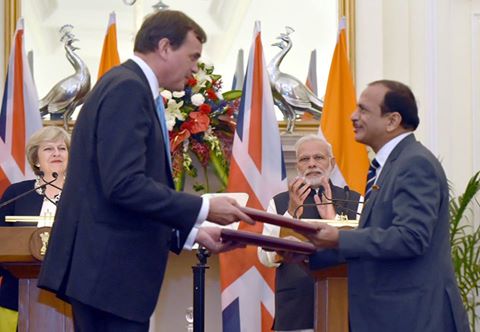 It will include exchange of best practices, experience and knowledge of intellectual peoperty awareness among the public, businesses, industry, research and development organisations and educational institutions, as well as on processes for disposal of applications for patents, trademarks, industrial designs and geographical indications.

It includes exchange between the officials, sharing of best practices and technical assistance for effective implementation of the initiatives of GOI to improve its ranking in the ease of doing business. Earlier on Monday, Modi and May addressed the India-UK Tech Summit here.

This is May’s first bilateral visit outside of Europe since she assumed the Prime Minister’s office in July this year.

She took over the prime ministership after David Cameron resigned following the historic referendum in June in which Britain voted to exit from the European Union. Cameron rooted for Britain to stay in the EU.

May’s visit comes a little less than a year after Modi’s visit to Britain in November last year.

May, who arrived here late on Sunday night on a three-day official visit to India, will also visit Bengaluru on Tuesday.

CWC members urge Rahul to take over as party president