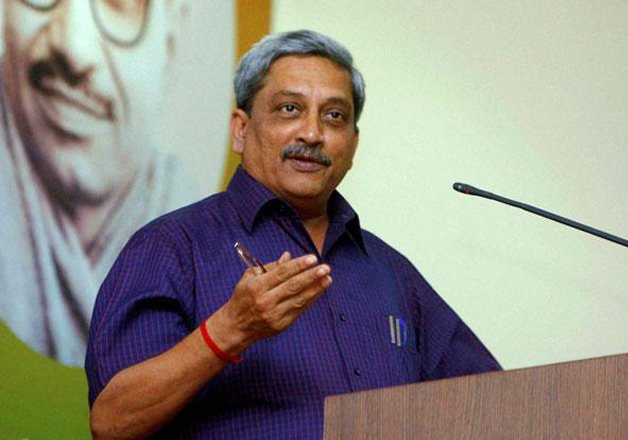 New Delhi, 7 Dec 2016 : Defence Minister Manohar Parrikar on Wednesday said India is all for peace, adding that peace can be ensured only by a strong country.

He also said that he had never used the Army for political gains.

Speaking at the ‘Agenda Aaj Tak 2016’ conclave here, the Minister said bilateral relations with China are improving, and that cease-fire violations along the Pakistan border have come down.  “Peace is the best thing… war is not the preferred option,” Parrikar said.

“We are for peace,” he said, adding that India had never initiated a war in the past. On China, the Minister said: “Our relations with China are improving.”

He added: “Those who compromise due to fear of war are called cowards. I don’t intend to call myself a coward. Peace is established by a strong country. You should be able to decide when to use power,” he said.

“In order to have peace, you will have to increase your power and show it sometimes.”  Commenting on the situation along the India-Pakistan border, Parrikar said: “There is peace right now. At this moment, cross-border firing is not that much.”

He said he had never tried to use the Army for political benefits. “We are not politicising the Army. West Bengal Chief Minister (Mamata Banerjee) did it. I felt it was wrong so I spoke in Parliament,” Parrikar said.

“Let the Army do its work; they are not part of politics.” Claiming that the concept of surgical strike had become a brand, Parrikar said the success of the September 28-29 surgical strikes made others “jealous”.

“I never used the Army on a political platform. All I have said is that we took a decision. You can call it good or bad… surgical strike took place, the status quo of not crossing the LoC (Line of Control) was rejected.

“Only the forces can cross the border, not political leadership; but this decision, whether good or bad, the marks should be given to political leadership,” Parrikar said. “Had something gone wrong, I don’t think anyone would have said anything but that it was an ill-managed operation, political leadership was not prepared, there was a shortage of bulletproof helmets or jackets,” he said.

“There are many fathers of success and few of failure. There was success, so everyone was jealous that the government would get credit,” the minister said. Parrikar said during the surgical strikes — across the LoC on September 28-29 and one earlier along the Myanmar border — he could not sleep all night. “I didn’t sleep the whole night when the eastern operation was underway. The pressure of decision-making was definitely on me,” he said. The Minister said the government “introduced unpredictability on the Kashmir border for the first time”.

Demonetisation is a scam worth Rs 8 lakh crore: Kejriwal

As logjam continues in Parliament, Advani says why not adjourn sine die