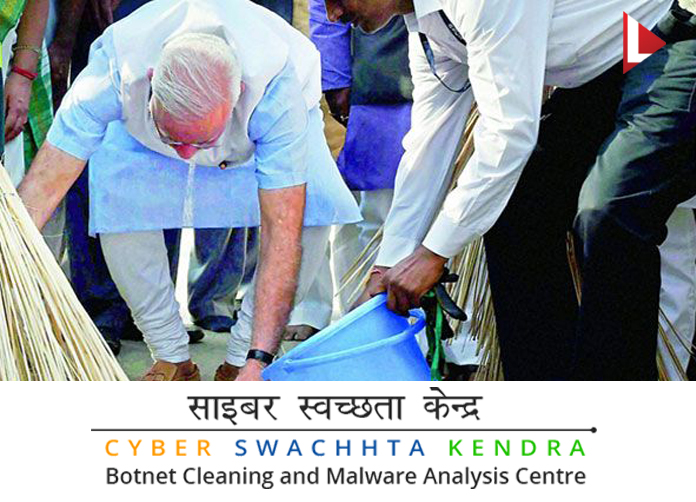 New Delhi, 21 Feb 2017 : At a time when cyber attacks are increasing, the government through its Computer Emergency Response Team (CERT-in) on Tuesday launched “Cyber Swachhta Kendra” — a new desktop and mobile security solution for a secure cyber space in the country.

The new solution will notify, enable cleaning and secure systems of end-users to prevent further infections.

“India today joined the distinguished club of countries that have malware-cleaning systems for the use of its citizens. As of now, we have 13 banks and internet service providers using this facility. With the expanding digital footprint in the country, I see a surge in start-ups in the area of cyber security by the end of the year,” said Union IT and Electronics Minister Ravi Shankar Prasad at the event here.

“This centre will work in coordination with the internet service providers (ISPs) and Industry. This Kendra will also enhance awareness among citizens regarding botnet and malware infection along with measures to be taken to secure their devices”, Prasad added.

The minister also announced that the National Cyber Coordination Centre will be operational by June 2017.

The government also announced it would set up CERT-Ins at the state level as well.

“The government will set up 10 more STQC (Standardisation Testing and Quality Certification) testing Facilities. Testing fee for any start-up that comes up with a digital technology in the quest of cyber security will be reduced by 50 per cent. We will also empower designated forensic labs to work as the certified authority to establish cyber crime,” Prasad noted.

Part of the solution, USB Pratirodh is a desktop security solution that controls the usage of removable storage media like pen drives, external hard drives and other USB-supported mass storage devices.

AppSamvid is a desktop solution which protects systems by allowing installation of genuine applications through white listing. This helps in preventing threats from malicious applications.

The move comes at a time when over 50,300 cybersecurity incidents like phishing, website intrusions and defacements, virus and denial of service attacks have been observed in the country during 2016.

“As per the information reported to and tracked by Indian Computer Emergency Response Team (CERT-In), a total number of 44,679, 49,455 and 50,362 cyber security incidents were observed during the years 2014, 2015 and 2016, respectively,” Minister of State for Electronics and IT PP Chaudhary said in a written reply to the Lok Sabha earlier this month.

The Cyber Swachhta Kendra is part of the government of India’s Digital India initiative under the Ministry of Electronics and Information Technology (MeitY).

“With the increased penetration of ICT infrastructure in our country, the threat of cyber security has become more serious and visible. There is a need to collaborate and come forth with solutions like the Cyber Swachhta Kendra in order to ensure a safe and secure cyber world for the citizens,” said Aruna Sundararajan, Secretary, MeitY.

According to Saket Modi, CEO and Co-founder of Delhi-based IT risk assessment and digital security services provider Lucideus, the launch of the Botnet cleaning centre in India is a much-needed move.

“The potential scale at which this centre can operate will clearly make this the largest in the world considering the size of the Indian internet ecosystem which has over half a billion people online and over 250 million smartphones and one billion mobile phones across the country,” Modi told IANS.

Botnets fundamentally is a programme which is automated and runs on a computing device which can be any IoT/smart device.

The popular attacks that happen these days using botnets are called the Distributed Detail of Service (DDOS) attacks.