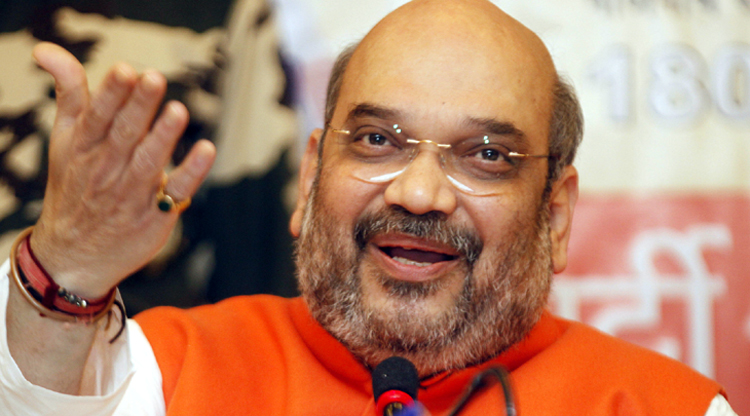 New Delhi, 6 Jan 2017 : The Narendra Modi government may again take “out of the box” action against Pakistan if it continues to indulge in a proxy war against India, BJP President Amit Shah told the party’s office-bearers at a meeting on Friday.

The Indian Army’s “surgical strikes” against terrorist launch pads in Pakistan-held Kashmir and the Centre’s move to demonetise Rs 1,000 and Rs 500 notes dominated his address.

“During the meet, Shah hailed the September 29 military action against terrorists and said India could again take ‘out of the box’ action if Pakistan persists with its policy of exporting terrorists to India,” a party source told.

Among the other issues discussed at the meeting were the attacks on party activists and offices in West Bengal after the Central Bureau of Investigation (CBI) arrested Trinamool Congress MP Sudip Bandyopadhyay in a chit fund scam.

The national executive meeting, to be inaugurated by Prime Minister Narendra Modi and Shah later in the day, assumes significance against the backdrop of the assembly polls in Uttar Pradesh, Uttarakhand, Punjab, Manipur and Goa, scheduled between February 4 and March 8.

Among the host of party leaders present at the meeting were General Secretaries Ram Lal and Kailash Vijayvargiya and Delhi unit chief Manoj Tiwari.

At the executive meeting, the party is expected to make demonetisation its focal point for chalking out its strategy for the polls to the five state assemblies.

While Shah will deliver the inaugural address at the national executive, Modi is slated to give the valedictory speech at the two-day meeting. Senior party leaders, union ministers and Chief Ministers of the BJP-ruled states are to participate.

Meanwhile, Uttar Pradesh BJP chief Keshav Prasad Maurya exuded confidence that the party would bag over 300 seats to come to power in the state.

“We are confident of getting over 300 seats in UP. The Bahujan Samaj Party and the Congress are no way in the fight, while the ruling Samajwadi Party is engrossed in a fight within itself. Also, they have not done any development work during their tenure,” said Maurya.

He said the Centre’s fight against corruption through demonetisation will help the BJP in the UP polls, and derided the Akhilesh Yadav regime for corruption.

“Chief Minister Akhilesh might be projecting his image to be clean, but the fact remains that he has to own up the responsibility of all the corruption that has taken place during his regime,” Maurya said.

Yuvraj back in Kohli-led ODI, T20 squads against England