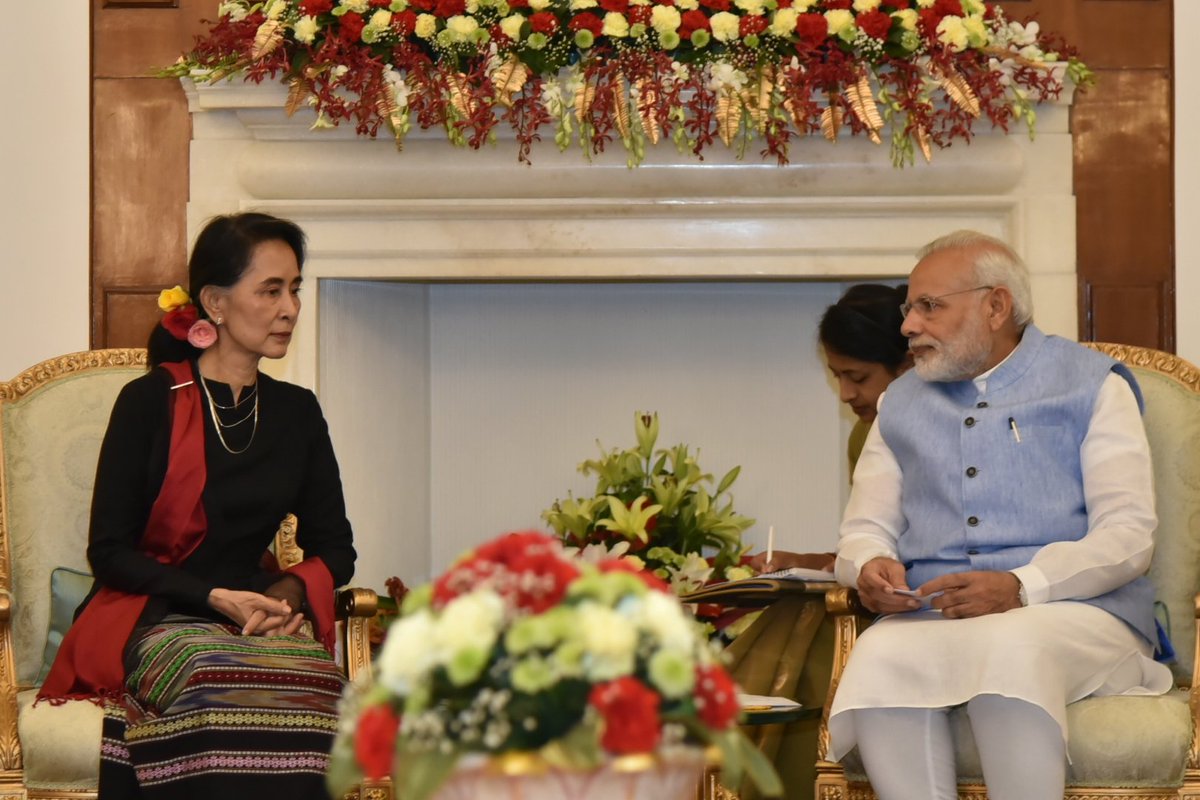 New Delhi, Oct 19 : India and Myanmar on Wednesday agreed to coordinate with each other on border security as Prime Minister Narendra Modi reaffirmed New Delhi’s commitment to help develop Myanmar. “As close and friendly neighbours, the security interests of India and Myanmar are closely aligned,” Modi said in the presence of Myanmar State Counsellor Aung San Suu Kyi after delegation-level talks between the two sides.

“We have agreed that a close coordination to ensure security in the areas along our border, and sensitivity to each other’s strategic interests, will serve the interests of both our countries,” Modi said.

Security has been an issue with insurgent groups from the northeast taking refuge in Myanmar territory.

In August, the Indian Army reportedly carried out surgical strikes in Myanmar after National Socialist Council of Nagaland-Khaplang (NSCN-K) militants fled to Myanmar from Mon in Nagaland after being attacked. Stating that India had a robust development cooperation programme with Myanmar, Modi mentioned the Kaladan multi-modal transport project linking Sittwe port in Myanmar with Mizoram and the trilateral highway connecting India, Myanmar and Thailand among others.

“From the mega connectivity projects like Kaladan and trilateral highway, to projects in the fields of human resource development, healthcare, training and capacity building, we are sharing our resources and expertise with Myanmar.

“India’s nearly $1.75 billion of development assistance is centered on people and is in line with the priorities of Myanmar government and its people.”

The Prime Minister said that in Wednesday’s talks, both sides agreed to enhance engagement in several areas including agriculture, power, renewable energy and power sector.

India and Myanmar signed three MoUs following the talks – one on cooperation in power sector, another on banking supervision and a third on designing an academic and professional building programme for the insurance industry of Myanmar.

“India will develop a varietal development and seed production centre in Yezin in Myanmar to enhance the quality of seeds,” Modi said.

“We will also work to develop a mutually beneficial arrangement for trade in pulses.”

Modi said India had offered to scale up power supply from Moreh in Manipur to Tamu in Myanmar and also partner in a pilot LED electrification project at a site designated by Myanmar.

“The MoU on … power sector … will help create the framework for advancing our linkages in this important sector,” he said.

According to the Prime Minister, the Archaeological Survey of India will soon begin work on restoring two old temples and inscriptions of King Mindon and King Baygyidaw at Bodh Gaya in Bihar.

Commending Suu Kyi for her leadership and commitment to take Myanmar forward, he said: “As a reliable partner and friend, India stands shoulder to shoulder with you.”

On her part, Suu Kyi said Myanmar wanted to work with India not just for friendship “but for peace and stability in the region and beyond”.

She said Myanmar wanted a rule of just laws “and for this we look forward to the experiences of the Lok Sabha and other legislative bodies.

“We believe India with its experience can help us in our endeavours.”

Suu Kyi met Modi on the third and concluding day of her state visit to India.

Though Suu Kyi is not the President as Myanmar’s constitution bars her from holding the post, the Nobel peace laureate is effectively the de facto ruler of the country.

This is the first official visit of Suu Kyi to New Delhi since her National League for Democracy assumed power in Myanmar in March this year.

Before reaching New Delhi on Monday, she attended the BRICS-Bimstec Outreach Summit in Goa.

Her visit comes after Myanmar President U Htin Kyaw’s came to India in August.