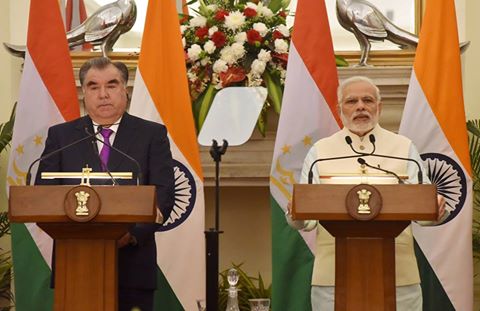 New Delhi, Dec 17 : India and Tajikistan will work closely on developing trade and transport links through the Chabahar Port in Iran, Prime Minister Narendra Modi said on Saturday after the signing of agreements with the Central Asian nation on enhancing economic ties and curbing double taxation, money laundering and terrorism.

“We will work on trade and transit linkages through Chabahar Port in Iran,” Modi said after his talks with visiting Tajikistan President Emomali Rahmon here.

Modi emphasised that he and Rahmon had agreed to increase the “scope and scale of our economic engagement especially trade and investment traffic” between the two nations.

He described Tajikistan “a valued friend and strategic partner” of India and said the two countries face multiple-security challenges in their extended neighbourhood, including in Afghanistan.

The Prime Minister said India and Tajikistan have decided to strengthen cooperation in fighting terrorism and radicalism in the region by way of exchange of information between the security agencies of the two countries.

“We agreed that peace in Afghanistan is very important for the region,” Modi said.

Modi appreciated Tajikistan’s role in the Central Asian region “as a mainstay against the forces of extremism, radicalism and terrorism”.

Rahmon, who is visiting India from December 14-18, was earlier accorded a ceremonial welcome at the Rashtrapati Bhavan here.

Ministry of External Affairs Spokesperson Vikas Swarup said it was “a special Saturday for Indian diplomacy” after President Rahmon received the welcome.

Fifth Test: India reach 60/0 at stumps on Day 2 vs England