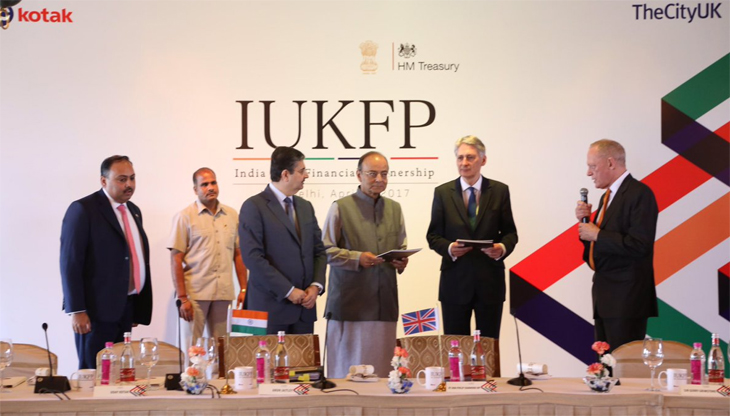 New Delhi, 4 April 2017 : India and Britain on Tuesday agreed to jointly set up a fund with corpus contributions of 120 million pounds each to finance Indian infrastructure projects, it was announced.

“In a major step taken today (Tuesday) on the National Investment and Infrastructure Fund (NIIF), a sub-fund with UK and NIIF participation was agreed upon,” Finance Minister Arun Jaitley told reporters.

He was briefing the media after the ninth India-UK Economic and Financial Dialogue here with the British delegation led by Chancellor of the Exchequer Philip Hammond.

“The Green Growth Equity Fund will have contributions of 120 million pounds from each participant to finance energy needs in India,” he added. The joint statement at the end of the talks said the “joint fund aims to raise 500 million pounds by also leveraging private sector investment from the city of London to finance Indian infrastructure projects.”

India set up the NIIF in December 2015 as an investment vehicle for funding commercially viable greenfield, brownfield and stalled projects. Last year, the government announced that it is in the process of setting up two sub-funds under NIIF — one in renewable energy, and another with focus on highway projects.

Both ministers said they also discussed a possible free trade agreement (FTA) after Britain formally leaves European Union (EU) through a protracted process that is expected to take about two years to complete.

“Post-Brexit, they are looking for more open trade, and more trade arrangements with India,” Jaitley said. “Obviously, this can be formally discussed after Brexit takes place. What shape it is going to take can only be formalised post Brexit negotiations,” he added.

“We have continued to consolidate past success and to identify new areas where we can work together, preparing for the point where Britain leaves the EU and is able to engage with Indian colleagues in a deep discussion about a future FTA between the UK and India,” said Hammond.

The two countries have very significant trade and investment relationship and Britain is the largest G20 investor in India in the last 10 years, while India is the 3rd largest investor in Britain, he added.

Hammond also announced that May would see fresh issues of Masala Bonds in London.

“There is a growing Masala Bonds market in London and these have already made a sizable contribution in raising funds for Indian infrastructure,” he said.

Masala Bonds are issued outside India but denominated in Indian Rupees, rather than the local currency.