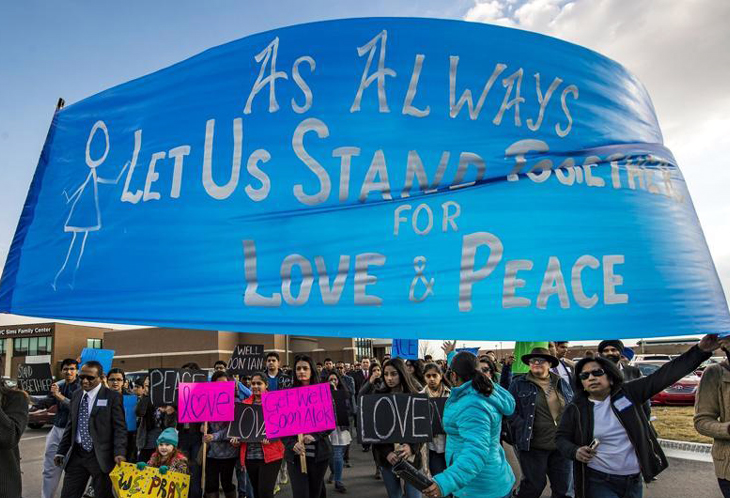 Washington, 27 Feb 2017 : Hundreds gathered in Kansas city for a peace march and prayer vigil for slain Indian engineer Srinivas Kuchibhotla and two other victims of a US bar shooting.

Alok Madasani, the Indian injured in an apparent hate crime last week, attended the march for peace and a prayer meeting at the Ball Conference Centre in Olathe on Sunday, reported Kansas City Star newspaper.

The vigil was sponsored by the India Association of Kansas City.

“I wish it was a dream,” Madasani said of the Austins Bar & Grill shooting that left Kuchibhotla dead.

American Ian Grillot was also shot when he tried to intervene. He is still in a hospital.

Purinton reportedly got into an argument with the victims and hurled racial slurs. He yelled “Get out of my country” and “terrorist” before shooting them.

“One thing I really want to emphasise is, the main reason I am here is that’s what my best friend, Srinivas, would have done,” Madasani told the gathering.

“He would have been here for me, and that’s what I’m doing right now.”

Kuchibhotla and Madasani worked as engineers at electronics manufacturer Garmin.

“What happened that night was a senseless crime and that took away my best friend,” Madasani said of the man who befriended him in 2008.

“Srini was the kindest person you would meet, full of love, care and compassion for everyone.

He never uttered a word of hatred, a simple gossip, or a careless comment. He would always make sure everyone is doing fine and taken good care.”

Ian Grillot’s sister Maggie also attended the march and the prayer meeting. She said her brother’s actions were because of how they were raised.

“It doesn’t matter what your colour is… Everybody’s equal,” she said.

The vigil followed a somber march outside around the conference centre.

Marchers held pictures, banners and shouted “We want peace”, “We love peace”, “Let us not leave our children”, “Unity is part of community, together we stand, divided we fall” and “Hate + guns tragedy”.

Ties with US at lowest since Cold War, says Russia