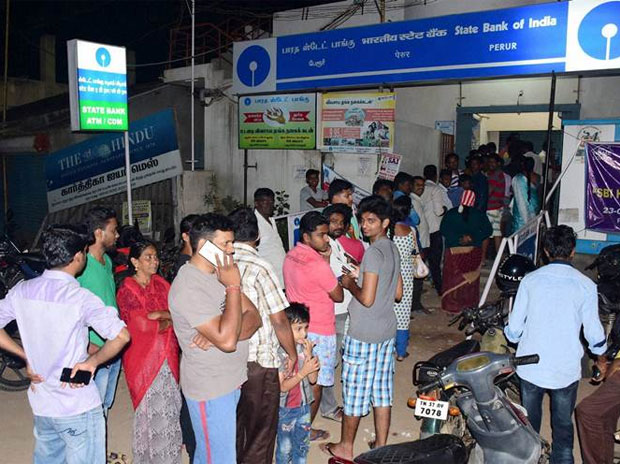 New Delhi, 10 Nov 2016 : Millions of anxious people armed with Rs 500 and 1,000 notes mobbed banks across India on Thursday to exchange or deposit them after the government decided to take the bills out of circulation.

Officials and residents said people began assembling outside banks even before they opened, a day after they were closed for business following Prime Minister Narendra’s Modi’s surprise announcement on Tuesday night aimed at curbing black money, corruption and terror financing.

People jostled to get lower denominations or new currency notes as a sweeping cash crunch caused all round chaos and inconveniences to buy even simple daily essentials.

Serpentine queues started forming near banks in Delhi and adjoining Noida and Gurgaon as early as 6 a.m., hours before they opened amid security to prevent any law and order situation.

“The rush was already there when I reached the bank,” Mukul, an executive at Axis Bank in Noida, minutes after it opened at 8. “Now there a huge crowd inside the bank.”

Many banks allowed people to enter only in groups. Bank officials stood outside distributing withdrawal or exchange forms to customers prescribed by the Reserve Bank of India.

A Kotak Bank nearby also witnessed a huge rush.

“I’m in the queue for the last one hour. I came at 9, I think I should’ve come early,” Naresh Chauhan.

There was frustration as some banks faced a cash crunch.

Although the government had said people could exchange Rs 4,000 worth of spiked currency daily, most banks halved this amount so as to cater to all customers.

Anil Wadhwani, an executive with a retail chain, realized this to his horror — after being in a queue outside a bank in Lajpat Nagar in Delhi for five long hours.

“I had brought four 1,000 rupee notes but could only exchange Rs 2,000,” Wadhwani said outside the ICICI Bank.

There was no limit on deposits but banks sought PAN number for major amounts. Those drawing Rs 10,000 from their bank accounts were also asked to produce identity proof.

Scenes of chaos were reported from almost everywhere, including Hyderabad, Mumbai, Kolkata, Chennai, Bengaluru and Chandigarh.

Many customers across India complained that some banks and ATMs ran out of cash stocks within hours.

Innumerable households reported they had to scrounge for smaller notes and even coins to buy basic food items on Wednesday and Thursday.

“The problem is indeed massive for everyone,” said Naresh Kumar, a south Delhi resident. “Now the 500 rupee note is so common that virtually no one is unaffected. This is different from the earlier demonetizations.

“The tragedy has worsened because it is near impossible to even enter banks now to do NEFT and RTGS,” he added.

For many who managed to get hold of the new 500 and 2,000 rupees notes, it was like a war won. Many clicked selfies and put them on social media.

But outside they encountered fresh problems as they could not get them changed due to a virtual absence of Rs 100 and 50 and lower denomination notes in the markets.

Amid the public anger over the inconveniences, the government scrambled to clear confusion about the decision to demonetize.

Finance Minister Arun Jaitley said people might face problems initially but in the medium to long run they would definitely benefit from the move.

“It is only those with large amounts of undisclosed money who will have to face the consequences under existing laws,” the minister said.

The government has directed all banks to work for 12 hours on Thursday, Friday, Saturday and Sunday and clear the rush of customers, and if needed, be open even next Sunday (November 20).

Setback for Punjab as SC strikes down law axing water-sharing