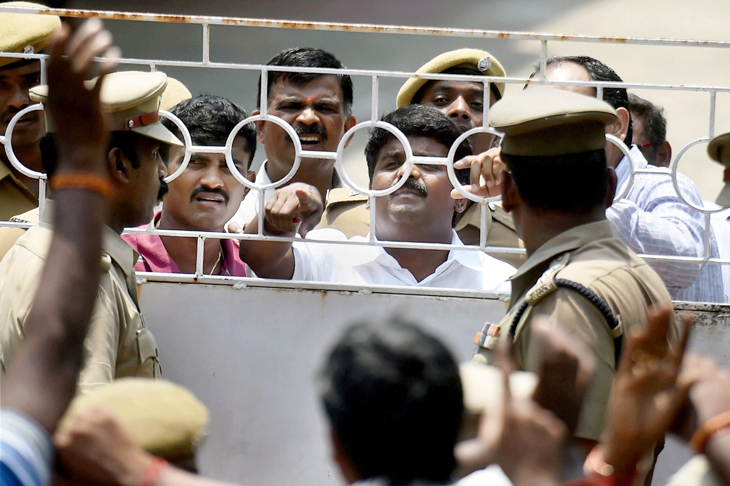 The IT officials also searched the residences and business premises of Vijayabaskar, his relatives and associates.

According to him, some incriminating documents were seized from the residence of Vijayabaskar.

The premises of some AIADMK functionaries and government officials were searched as well.

Initially, the raids were launched at around 35 places. Tne operation was later extended to nearly 50 addresses, including some located outside Chennai in the state, the official added.

He said: “Trigger for raids at Vijayabaskar’s residence is the money distributed to voters in the R.K. Nagar assembly constituency where the by-poll is slated for April 12.”

Vijayabaskar is a loyalist of AIADMK General Secretary V.K. asikala, now in jail for corruption. Sasikala’s relative T.T.V. Dhinakaran is contesting from the R.K. Nagar constituency and complaints of large-scale bribing of voters has been lodged with the Election Commission by the opposition parties.

The officer said Minister Vijayabaskar was on IT radar for the past one year in connection with his quarry business.

Soon after the news about the raids broke, media persons assembled outside Vijayabaskar’s residence.

AIADMK (Sasikala faction) leaders and cadres, too, gathered there and demanded entry into his residence.

Speaking to the media, Vijayabaskar said the IT officials were not able to find not even Rs 10,000 from his house and his children were not allowed to attend school.

The raid at Sarathkumar’s residence comes a day after he announced his support to Dhinakaran.

PMK founder S. Ramadoss in a statement demanded sacking of Vijayabaskar and other officials whose residences were searched by the IT officials.

DMK’s working President and Leader of Opposition in the state assembly M.K. Stalin said IT raids on AIADMK leaders was not something new.

He said IT searches were also conducted at the residences of former ministers Natham Viswanathan, Saidai Duraisamy and others.

According to Stalin, despite the raids by the IT Department on these people, there was no follow-up action and the central government should come clear on it.

Constitution bench to hear plea on Bangladeshi minorities in India