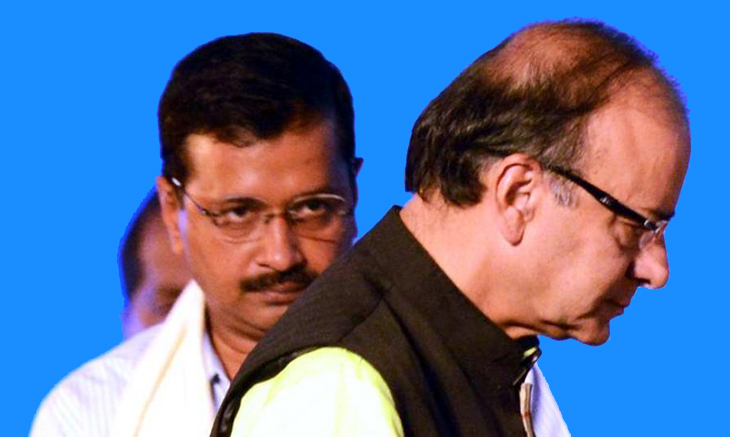 New Delhi, 22 2017 : May Finance Minister Arun Jaitley on Monday filed a second civil defamation suit of Rs 10 crore in the Delhi High Court against Chief Minister Arvind Kejriwal over the word “crook” used by his lawyer.

Jaitley sought Rs 10 crore as damages after Ram Jethmalani used objectionable words against the Union Minister in an open court.

This is a separate case from the ongoing DDCA defamation suit against the Chief Minister and five other Aam Aadmi Party leaders that Jaitley filed in 2015.

On May 17, Jaitley and senior advocate Ram Jethmalani clashed in the court with the Minister taking strong objection to the word “crook” used during cross examination in the earlier defamation case.

“I intend to show that this man (Jaitley) is a crook,” Jethmalani had said, prompting strong objection from the Minister.

Jaitley, who was being cross-examined, furiously asked Jethmalani whether the word “crook” used by him was in his personal capacity or as per the instruction of Kejriwal.

To which, Jethmalani had said that it was used by him on instructions from his client (Kejriwal).

“I will aggravate the charges against the defendants (Kejriwal)… There is a limit to personal malice,” he had said after Jethmalani said he wanted to prove his point that the Union Minister was a “crook”.

Jaitley’s counsel had objected to Jethmalani referring to the Minister as being “guilty of crime and crookery”.

Jaitley was being cross-examined by Jethmalani in connection with the Delhi and District Cricket Association (DDCA) defamation case filed by the Minister.

In December 2015, Jaitley filed a civil defamation suit against Kejriwal and AAP leaders Kumar Vishwas, Ashutosh, Sanjay Singh, Raghav Chadha and Deepak Bajpayee, claiming that they made “false and defamatory” statements in the case involving the DDCA, thereby harming his reputation.

Jaitley had sought Rs 10 crore in damages from Kejriwal and other AAP leaders in the DDCA case as well.

He had claimed that the AAP leaders attacked him over alleged irregularities and financial bungling in Delhi’s cricket association, of which he was the President for about 13 years.