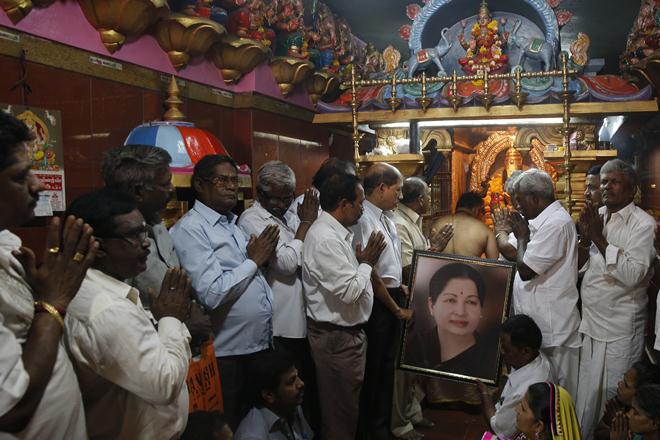 A brief hospital statement said the AIADMK leader, who suffered a cardiac arrest on Sunday evening, “continues to be very critical and is on ECMO and other life support systems”.

ECMO or extracorporeal membrane oxygenation is a life support system used for patients with life threatening heart or lung problems.

Apollo said the 68-year-old Jayalalithaa, who has been in hospital since September, was being treated and closely monitored by experts.

Crowds began to mass outside the hospital from Sunday evening as news that Jayalalithaa had suffered a cardiac arrest spread like wild fire.

“Our doctors are closely monitoring (her) condition and they are trying their very best,” tweeted Apollo Hospitals Joint Managing Director Sangita Reddy on Sunday.

She then described the Chief Minister’s condition as “critical”.

But he did not issue any statement after his hospital visit. On earlier occasions, Raj Bhavan used to issue statements each time he visited Apollo Hospital. Apollo said on Sunday evening that Jayalalithaa “is being treated and monitored by a team of experts including cardiologists, pulmonologist and the critical care specialists”.

It said Richard Beale, a doctor in London, had been consulted and that he concurred with the line of treatment.

In an another tweet, the hospital said: “The Hon’ble CM is the beloved leader of the masses. Please join us in praying for her speedy recovery. #GodblessAmma #Jayalalithaa.”

A large number of police personnel was deployed at the Apollo hospital. Security was also stepped up across the sprawling state where Jayalalithaa enjoys widespread support.

Tamil Nadu ministers and legislators gathered at the hospital along with a mass of AIADMK activists and Jayalalithaa fans.

Many broke down outside the hospital as they collected behind police barricades.

Some men and women, their hands folded, offered silent prayers for Jayalalithaa’s early recovery. Some tried to enter the hospital premises but were restrained. Some parts of Chennai experienced shortages of milk as traders jacked up prices fearing a shutdown.

DMK chief M. Karunanidhi and his son and party leader M.K. Stalin also conveyed their best wishes for her recovery. Apollo Hospital had earlier said she was on the road to recovery and she could take a decision on going home.

Meanwhile, authorities in Kerala strengthened security on the border with Tamil Nadu. Police were put on alert in Thiruvananthapuram, Kollam, Idukki and Palakkad districts that border Tamil Nadu.

Related Topics:AIADMKChennaiHospitalJayalalithaaTamil Nadu
Up Next